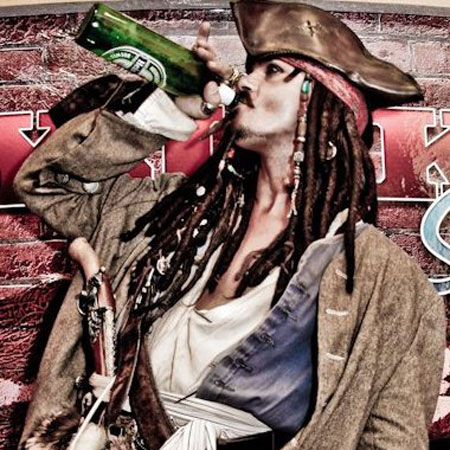 REASONS TO BOOK
An uncanny Johnny Depp celebrity impersonator who has everyone who encounters him believing that he is the real Johnny Depp
Our Las Vegas lookalike impersonates all Johnny Depp characters from Jack Sparrow, Edward Scissorhands, Mad Hatter, Willy Wonker and many more
Brilliant for any occasion that wants to create a Hollywood theme or fool guests into believing that they have actually met Johnny Depp in the flesh
Roving character that is perfect for meet and greets, parties, film festivals, corporate entertainment or to use as a decoy for the real Johnny Depp
Based in Las Vegas and available for bookings worldwide
Walkabout Entertainment, Tribute, Lookalikes and Impersonators, Walkabout Characters

To leave guests and passers by star struck and weak at the knees, hire our uncanny Johnny Depp lookalike for the ultimate celebrity impersonator. Our Las Vegas lookalike astounds all who encounter him, with his fantastic Johnny Depp character costumes ranging from; Captain Jack Sparrow, Edward Scissorhands, The Lone Ranger, Mad Hatter, Willy Wonker and many more!

A Johnny Depp lookalike and roving Captain Jack Sparrow character is incredible for meet and greets, film festivals, themed parties and theme parks. Our professional celebrity impersonator has perfectly mastered Johnny Depp’s mannerisms in each and every one of his characters.

Our Las Vegas lookalike is guaranteed to turn heads as he roams around venues and theme parks bringing the characters of Captain Jack Sparrow, Edward Scissorhands, The Lone Ranger, Mad Hatter and Willy Wonker to life outside of the movies.

Fantastic costumes that capture attention wherever they go will have guests and passers by lunging with their phones at the ready for a photo with the renowned Johnny Depp or any of his popular characters. A celebrity impersonator act that not only brings Johnny Depp characters to life but can also be used as a decoy for the real life Johnny Depp!

Our Johnny Depp lookalike and celebrity impersonator is acurrate, fun and uncanny - guarenteed to add another dynamic to any type of occasion or event, is a hit with audiences of all ages.

To book our roving Johnny Depp celebrity impersonator, or for more information contact our Entertainment Specialists.