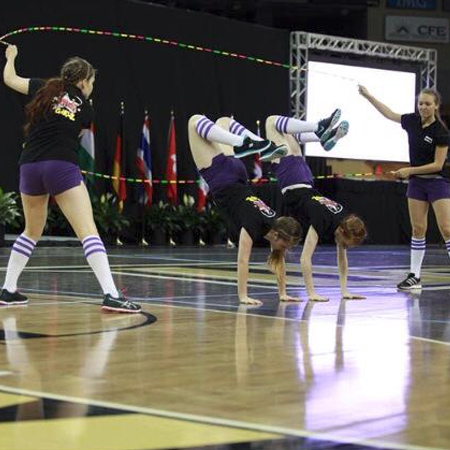 This multiple award winning Jump Rope Team really can demonstrate every trick and skill in the book. The coaches are the top 7 ‘skippers’ in the country and together the British team hold many titles and World Records, including appearing on Sky One and smashing the Guinness World Record twice!

They have jumped-their-stuff to large audiences, on TV and at media events, fitness shows and festivals appearing on ITV, SKY and Soccer AM. As well as featuring in Olly Murs’ Music Video “My heart skips a beat”, James Morrison’s Music Video “You give me Something” and Madonna’s Music Video “Give it to me”, as well as working alongside Girls Aloud and Myleene Class.

The team lead coaching workshops throughout the UK and Europe – from complete beginners to advanced competitors and whilst jump rope has become more popular in the industry the girls have gained a lot of experience.

Jump Rope Team UK skippers have moved into the corporate and commercial world due to demand and impress audiences everywhere with their unbelievable strength, fitness, coordination and skills.