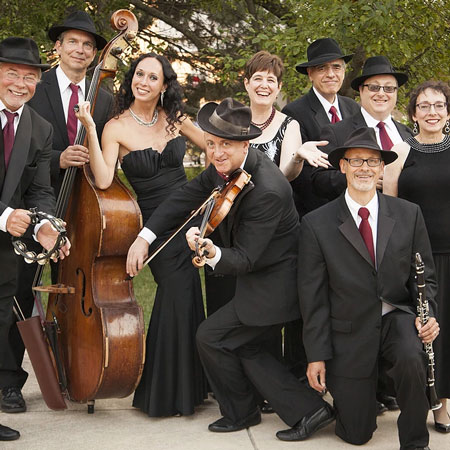 REASONS TO BOOK
A Yiddish band that fuses Eastern European, Yiddish and gypsy styles together is the ultimate Klezmer band
Yiddish band embodies Jewish soul music
Hit with audiences of all ages
Performances incorporate warmth and humour
Based in Illinois and available for worldwide bookings
Gypsy , Specialist Musicians, Harpists, Live Music and DJ

A Yiddish band that ensures every performance is overflowing with variety, professionalism and audience engagement. This Klezmer band are a hit with audiences of all ages and bring Jewish soul music to life with their fusion of Klezmer music, Eastern European, Yiddish and gypsy styles.

With every performance offering a warm and engaging atmosphere, this Yiddish band are inspired by the soulful sound, emotional urgency and humour of the original 20th Century Klezmer recordings upon which they base their repertoire around.

A band who have been performing for over 20 years has a multitude of experience in performing live concerts, inspiring members of the community and creating Jewish soul music.

An 11-piece band that consists of:

This versatile Klezmer band can also be booked as an 8-piece band with one vocalist and seven musicians to provide a scalable and adaptable performance.

In addition to performing exciting performances our Klezmer band offer workshops on Klezmer and Yiddish music at libraries, synagogues and all venues that desire lessons from master musicians on Jewish culture, seeding the community, nurturing cross-cultural education and good will.

To book this wonderful Yiddish band or for more information, contact our Entertainment Specialists today!

" These are fine musicians...they care about the music. And when they care - I care "

" This Klezmer Band brought the highest level of energy and musicianship, captivating the audience with their spirit and sound. You could see the gratitude on the faces of everyone in the room "

" This Klezmer Band just might be the absolute best klezmer band in the world. When they played in Peoria, they drew a capacity crowd of foot-stomping, cheering, standing-ovation, dancing-in-the-aisle exuberant fans. And what fans! Young, old, in-between, high-school students, college students, and other musicians - of every colour, creed, and religion "

" This Klezmer Band...a joyous celebration of music that was and, fortunately, still is. "