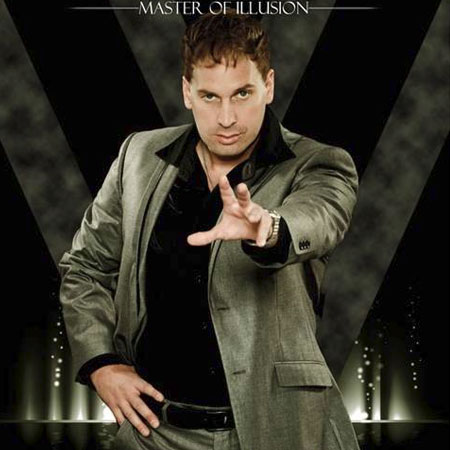 REASONS TO BOOK
A mastery of magic and illusion fused with comedy
Won great acclaim at venues such as the Las Vegas Hilton, MGM Grand Casino
Can integrate into his show the promotion of a new company product
Previous clients include Coca-Cola, Xerox, MGM Grand, Calvin Klein
Based in Las Vegas & available to perform at events worldwide
Magic and Illusion Show, Magic and Illusion, Cabaret and Stage Shows, Illusionist, Magic Stage Show

To appreciate the attraction of Canadian Magician Sean, feel the excitement in the words of the Entertainment Manager of Sega World Theme Park in Sydney, Australia.

“By far Sean is one of our favourite entertainers, a great crowd pleaser with his quick sleight of hand, affable personality, and great stage presentation.”

With over 20 years magical experience in practically every type of venue in Canada, United States, Australia, Hong Kong and Brazil, Sean has perfected his skills as a magician, but moreover as an “entertainer” – a real crowd pleaser.  Sean has won great acclaim at venues such as the Las Vegas Hilton, MGM Grand Casino, Mandalay Bay (House of Blues), the renowned “Carnival” in Brazil, various casinos, state fairs, corporate events and product launches. He has also received many accolades for his close-up entertainment and Illusion Comedy Show.

As with most successful entertainers, Sean “works his audience”, and “involves” them in on-stage and close-up entertainment that elicits that wonderful combination of amazement and laughter.

Whether your audience requires his talents up-close-and-personal, or on stage, Sean will custom-tailor the show to fit your type of event. But hold onto your seat! Once Sean hits the stage, GET READY TO LAUGH! You’ll instantly notice years of experience and just how comfortable Sean is up there. This spellbinding show is not just a magic show, it’s a Mastery of Magic Fused with Comedy. Sean’s show has become a real crowd pleaser for audiences of all ages and is adored by his fans wherever he goes. Book “The Master of illusion with Comedy Fusion” TODAY!

Sean has a solid history and endorsements from a wide variety of Corporations that have expressed sincere gratitude for his special efforts in tailoring an event to suit the needs of the Corporation. Sean’s flexibility allows him to easily integrate into his show the promotion of a new company product by making it “appear” in a mystical and unforgettable way.

Here is an example of a popular choice by Corporations of activities for the event. To liven up cocktail hour and get colleagues and guests mixing, Sean's effective and entertaining close-up magic will be utilized. After dinner, Sean will perform an initial segment of his Magic & Illusions Show, and then transform a volunteer from the audience into the CEO of the company. The CEO will then begin the kick-off for the evening. Sean will be called back out to “wrap up” the evening with the balance of his Gold Show. This will cause the audience to sustain their excitement for the evening and leave with high spirits.

" We’ve had Sean perform his Comedy Magic and Illusion show from Las Vegas to Orlando, and he’s always been a HUGE hit. "

" That was an unbelievable illusion show and entertainment. You’re hired. "

" A great professional who really helped us accomplish our objective in terms of moving our professional team forward. Thanks for your great work Sean. "

" Sean, how did you do that? ... that's absolutely amazing! You are the best magician I have ever seen! "