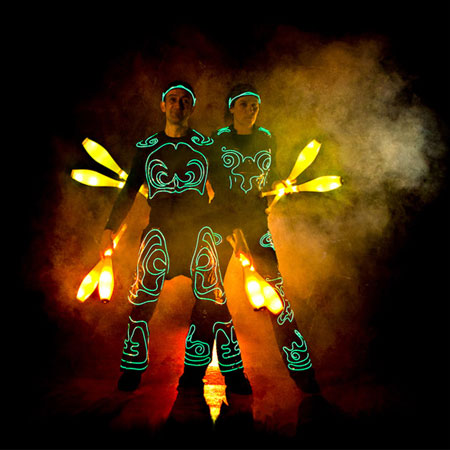 This uniquely original show includes Hi-Tec custom made light suits mixed with the latest LED juggling equipment. They have programmed these to music to attain a quite remarkable show experience. A highly skilled juggling display choreographed to captivating beats. Beautiful light trails in 16 million different colours are created by the state of the art, programmable glow equipment.

Their Spiral show incorporates more stunning effects with PSI glow hula hoops, glow balls and glow staff. Like a firework display without the health and safety issues.  This will leave your audience thrilled with an explosion of colours, shapes and light.

This LED Glow is perfect for cabaret shows, clubs, parties, late night shopping or any location that needs lighting up.  The show can be extended further to a 3 or 4 person routine, with light costumes using a mix of balls, clubs, poi, staff, hula hoops and other illuminated objects.

This act also offers an ambient fire performance for meet and greet.  1 to 10 world class performers create a fire spectacular that will help light up any event.

" Thank you for the amazing contribution. What you did that night is what the most magical memories are made of. I am so grateful to you all. I wish you could see / receive the most moving, heart-felt thank-you’s I am receiving from the guests. Most people keep hugging me and say it was the best party they have ever been to. And a large part of that is down to you three. "

" I've never seen a fire show quite like that before "

" I would like to express my gratitude. I think it was one of the most magnificent and lasting sights at this year’s WOMAD. "