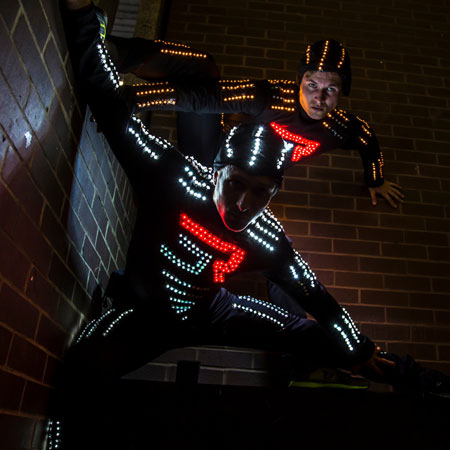 This world leading parkour team have over 10 years experience providing jaw dropping action for block buster movies such as James Bond Casino Royale, Harry Potter, Death Race and You got served. They have performed across the globe for major brands and artists. The team also stared in their own Theatre show in London and Edinburgh entertaining sold out venues.

They now offer a never been seen before fusion performance bringing together the exhilarating parkour and free running movements with cutting edge L.E.D suits that were custom made for maximum effect.

Book this scintillating act to take your event to the next level, get in contact touch with our specialist team who will talk you through the booking process.

" I worked with them on two commercials, both of which had some challenging stunts and required professionalism and quick thinking. They have both of those qualities in spades and bravado to boot. I can't wait until I get another chance to work with them again! "

" Simply the best Parkour athlete I have worked with!!!!! "

" Sam's lack of ego and mature approach made a difficult shoot much easier to handle. His enthusiasm and obvious talent made him instantly likeable and allowed him to fit in and work naturally as part of the team on a particularly complex shoot. "

" Right from the beginning of the project they showed great enthusiasm and professionalism. We were extremely happy to meet and work with such a great group of guys. They were very aware of what needed to be done, and executed all necessary stunts with precision, making the shooting team's job much easier. I would strongly recommend them for stunt work to any production! "