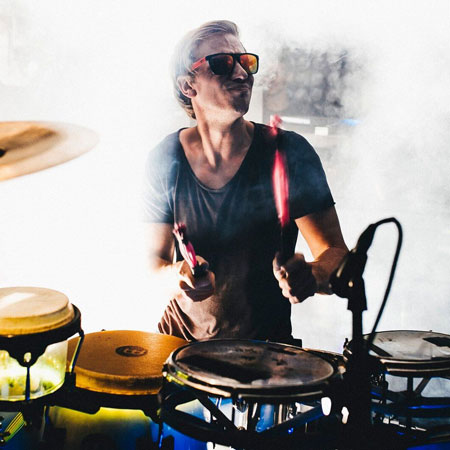 REASONS TO BOOK
Most energetic and entertaining nightclub percussionist in the UK
Reached the finals of Britain's Got Talent 2012
Entertained celebs at London's most exclusive parties
Performed weekly at the biggest and best clubs in the world as well as performing with artists such as Rizzle Kicks
Based in London and available for worldwide bookings
Live Music and DJ, Drumming and Percussion, TV Show Talent Acts, Talent and TV Show Personalities

Over the past 5 years Michael has become the most requested and successful nightclub percussionist from the UK.  His funky riffs, mesmerising speed, flawless technique and endless stamina are second to none.  During his career he has taken Ibiza by storm including: Space, Privilege, Es Paradis, Eden and once at the Ibiza Rocks Hotel.  In the past he has entertained Beyonce at her VIP After party in Egypt, performed on the main stage at the European Winter X Games in France, successfully performed on 3 European Tours, and supported dozens of major artists such as Professor Green, Rizzle kicks and Example.  Now with nearly 700 performances in the club industry alone, he has built up an extremely successful reputation as the most energetic and entertaining nightclub percussionist from the UK.

He now regularly tours all over Europe entertaining raving club goers everywhere, performing to thousands in some of the world's biggest and best clubs!  At the age of 24 Michael has already established himself as one of the top percussionists in the industry, playing all over the world, most recently in Amsterdam, France, Belgium, Sweden, Canada, and a full summer in Ibiza, alongside some of the biggest DJ's and artists.

No other percussionist performs like Michael... he's not one that's going to disappear into the background - headlining large stages like the O2 Academy have shown that!  He combines exceptional flare, unmistakable unique style, and massive energy with his attention-grabbing percussive rhythms - described as "so on the beat all the time your like a robot" by P2DJS, Paris".  Wherever he plays they want him back and are amazed by his talent as an entertainer!!

Michael is constantly adding new unique aspects to his performance to stay ahead of the rest, from customised laser gloves to unique light-up LED bongos, even his sticks are custom made for nightclub performances!  The LED walkabout Bongos are the perfect addition to this show. If you are looking to add an interactive element to your event. With this setup FiSH can get down off the stage and take the party to your guests. He’s proven time and time again to liven up any dance floor with his balearic beats and colour changing bongos.