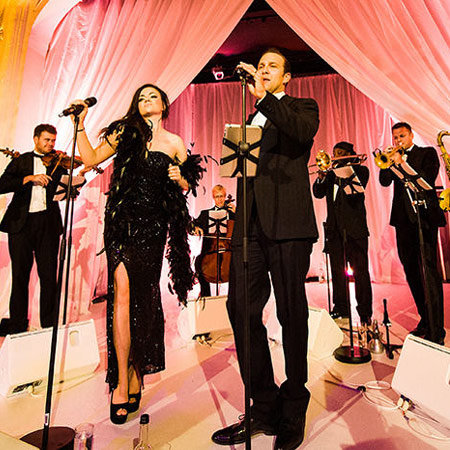 REASONS TO BOOK
Little Swing Band fronted by leading celebrity male vocalist Stefan Booth
Have performed at top venues including The Savoy Hotel and The Dorchester
Collaborate with identical twin dancers who can dress as flapper girls
Guaranteed to take audiences back to a bygone era of vintage glamour
Based in London and available to perform at events worldwide
Live Music and DJ, Jazz,Swing,Blues and Jive

The Little Swing Band features string quartet, horn section and male and female vocalist to backing track, guaranteed to take you back to a bygone era.  They are fronted by leading celebrity male vocalist Stefan Booth, who has appeared on EastEnders and Chicago the Musical on the West End.

The band can currently perform as an 8-10 piece for a breathtaking 45-minute set of the best swing music around. The band has performed at London's top venues including The Savoy Hotel Ballroom, The Dorchester and The Hurlingham Club (LTA Wimbledon Ball 2014).

They can also be accompanied by Britain's Got Talent's Joseph Hall, who WOWed judges and the public alike with his astonishing dancing skills.

The Little Swing Band also collaborates with identical twin dancers who can dress as flapper girls and provide perfect visual entertainment to accompany the best rat pack in town.  They can be followed by a DJ playing Electro Swing tracks to keep the vintage mood until the end of the night.

" I wanted to thank you so very much for the fabulous music which you provided for my daughter's wedding at The Savoy on 31st August this year. It was absolutely fantastic, from the strings, which accompanied our meal to the wonderful swing band after the speeches. The singers were brilliant and I wish to particularly commend Stefan Booth who was outstanding! Thank you for contributing to the celebrations on the day and for making them special. "

Rula Komodromos, Mother of the Bride, Wedding at the Savoy Hotel London, August 2013