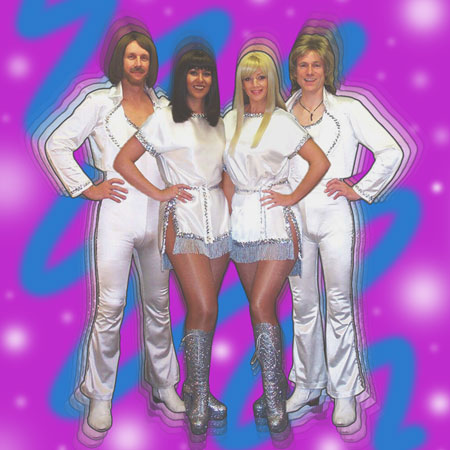 Having thrilled audiences throughout the world with their stunning tribute to one of the world's most successful acts, this internationally acclaimed live band have firmly established themselves in the super-league of tribute entertainment with their ABBA Tribute Show.

This Live Abba Tribute show was formed as a 6-piece band in 1997 with the sole aim of becoming the best "ABBA" tribute band in the World.  Individually, its musicians have toured and recorded with some of the biggest names in show business. Collectively, they are now making a name for themselves.

With meticulous attention to every detail, they have combined stunning musicianship, authentic costumes, Abba-esque choreography and a suitable dose of tongue-in-cheek humour within an electrifying performance to produce a breathtaking LIVE ABBA Tribute Show that appeals to all ages.

But the most important challenge to the band was to recreate the "ABBA" sound absolutely LIVE on stage, without resorting to hidden backing tapes and discs.  After all..... ABBA never used them, so why should an ABBA tribute! The band were determined their audiences wouldn't be cheated with a glorified ABBA karaoke.

And they have succeeded.  Resulting in an ABBA tribute show that delivers the kind of excitement and audience reaction only a LIVE band can deliver. Just like the real ABBA!

Based in the UK, they have not only won over discerning ABBA fans from close to home, but have responded to ever-increasing demand and taken their spectacular ABBA tribute show around the world as word of their perfectionism spreads.

This Abba tribute perform at theatres, festivals, corporate events, private parties, weddings, casinos, colleges & universities, as well as making TV & radio appearances.  Their tribute to ABBA has been embraced by people of all ages and from all walks of life. They are equally at home headlining festivals and performing in front of thousands of demanding "ABBA" fans as they are playing at more intimate, private events such as birthday parties and weddings, where their sole aim is to make someone's "special day" VERY special!