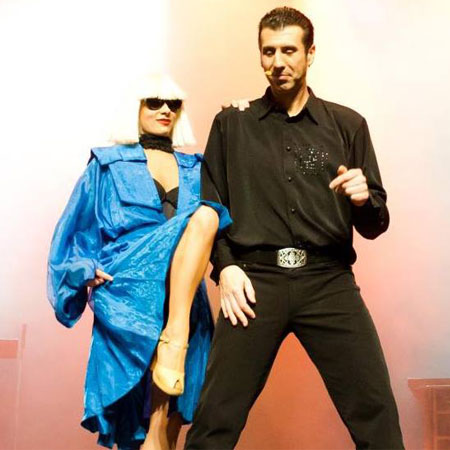 REASONS TO BOOK
Impressive Magician and Illusionist with over 20 years of experience
Enthrals audiences with levitation, disappearances and manipulation
He has earned a Mandrake d'Or, the highest award in magic
Has worked with Disneyland Paris for the magical effects and illusions
Previous clients incl IBM, Mercedes Benz, Chanel, Wella...
Magic and Illusion, Cabaret and Stage Shows, Magic and Illusion Show, Magic Stage Show, Illusionist

Magician & Illusionist Phil began magic at the age of thirteen and attended classes at the Academy of Magic Olympia in Paris. Like all magicians, he learnt the basics of manipulating cards, coins and balls but he soon found his true talent on stage, specialising in grand illusions. He offers magic shows combining the passion of great illusions and the spirit of public participation.

He enthrals his audiences with levitation, disappearances and manipulation. See a lady cut in nine or lose her head, or even more spectacular, the appearance of an AC Cobra sports car before your very eyes! A professional magic and illusion performance, filled with suspense, fascination and a touch of humour.

His impressive grand illusion show has been performed in theatres, hotels, cabarets and casinos around the world, including two years at the Paradis Latin in Paris, France. He has over 20 years of experience travelling around the world (Japan, USA, Spain, Greece, Portugal, Germany, China, Slovenia, Egypt, Italy), performing his tricks, including several years on the most prestigious American cruise ships. Phil has also worked with Disneyland Paris for the magical effects in the shows, including the flying of Aladdin's magic carpet, magic movements of the Little Mermaid and Mary Poppins flying.

Magician and Illusionist Phil offers magic shows combining the passion of the great illusions and the spirit of public participation, His many years of professional performances have earned him a Mandrake d'Or, the highest award in the magic world. He is a wonderful entertainment option for corporate events, private parties or after dinner shows.