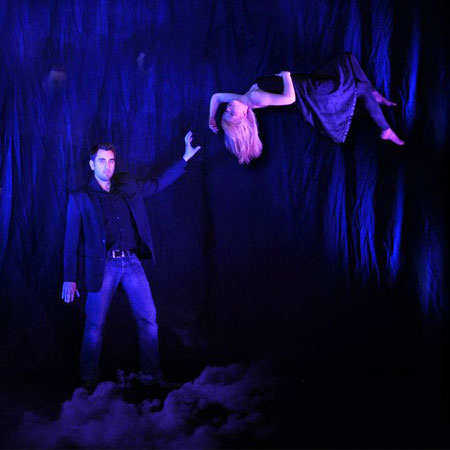 Our amazing illusion artist and Sweden’s Got Talent semi-finalist offers a jaw-dropping stage illusion show that has captivated audiences around the world. A world-class illusionist and magician, book his illusion shows as after dinner entertainment and for corporate events, theatres and much more.

A world-renowned illusionist, our illusionist artist and magician has a wealth of awards and accolades to his name. He won the title of ‘Sweden’s Best Illusionist’ in 2013, wowed the judges and live audiences of both Sweden’s Got Talent (2014) and Norway’s Got Talent (2015) where he reached the semi-finals, and has worked as famous Swedish magician Joe Labero’s personal magic consultant.

His fantastic stage illusion show is filled to the brim with jaw-dropping grand illusions and impressive magic tricks. Taking magic entertainment to a whole new level, our illusion artist will make his glamorous assistant float in the air in an impossible levitation act, seemingly cut his assistant in half with no harm done and make objects and people appear and disappear in the blink of an eye! Packed with atmospheric music, high-energy dance routines, dry ice, plenty of theatrics and nail-biting suspense, and mind-boggling illusions our magician’s illusion shows will not fail to impressive and have audience members on the edges of their seats.

A master of modern magic his strong stage presence and outstanding talent for the art of illusion has lead him to perform for huge corporate names like Volvo, IKEA, Mercedes, Microsoft and MacDonalds. His stage illusion show can be customised to also incorporate branding or products, making him a favourite with product launches, awards ceremonies and corporate events.

To find out more about our amazing illusionist, his repertoire of grand illusions and all the customisable options available for his illusion shows, get in contact with our experienced entertainment coordinators who are on hand to help!