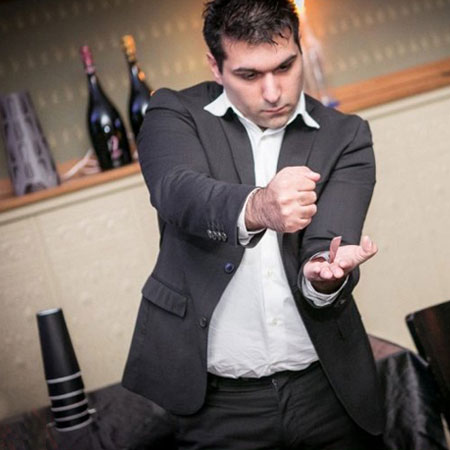 REASONS TO BOOK
Performs incredible mind reading, telepathy and spoon bending tricks
Began a deep fascination with magic and mentalism from the age of 12
Has appeared on the well known television program, Italia’s Got Talent
Available for large-scale stage shows as well as interactive close up acts
Based in Italy and available to perform at events worldwide
Walkabout Entertainment, Magic and Illusion, Magicians and Mind Readers, Close up Magician, Magic Stage Show, Mentalist

Discovering the world of mentalism and magic at the young age of 12, Simone began a deep fascination with mentalism as an artistic form that cleverly unites illusionism, communication and psychology, this talented mentalist has designed a show that is both highly playful and for an adult and conscious audience is also extremely formative. Our skilled mentalist is in fact able to read his audience's mind, to influence their behavior and hypnotise them, among other tricks.

In the last decade, this Italian ming reader has performed all across Italy and has been awarded several times, which has made him nationally and internationally recognised.

Our mentalist won the award for new authors of the Italian Magic announced by Masters Of Magic (highest authority worldwide). He also won the Masters of Web Award given by Masters of Magic to the most followed artist online.

This mind reading specialist graduated in non-verbal hypnosis with Dr. Marco Pacori (Showman of various Italian programs). He's a Master Practictioner in neuro linguistic programming (direct license from the society of NLP by Richard Bandler). On top of that, he's the author of top-selling video courses distributed all over Italy and a semi-finalist of Italy's Got Talent!

As a professional Mentalist, Simone performs all over Italy and Europe. He is available to perform full stage shows at after dinner events as well as mesmerising and interactive close-up performances, perfect for entertaining guests at a wedding, drinks reception, exhibition or corporate dinners.