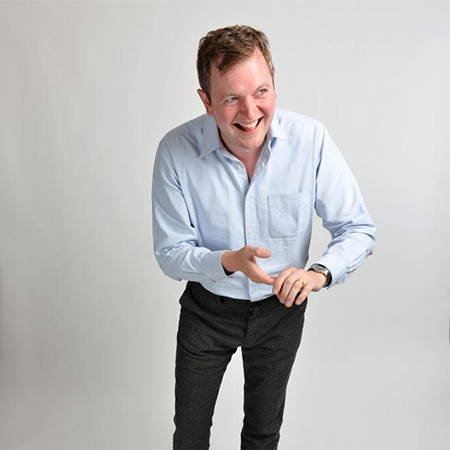 REASONS TO BOOK
Miles Jupp started performing stand-up comedy in 2000 when he won both 'So You Think You’re Funny' and Leicester Mercury Comedian of the Year
Vast experience as a TV and radio host include shows such as Radio 4 'Balham Bash', 'Loose Ends', 'The News Quiz', 'In and Out', among others
A regular at the Edinburgh Fringe until 2010, his acclaimed 'Fibber in the Heat' show culminated in a sell-out performance in London’s West End
Acting roles include the award-winning BBC2 sitcom Rev or BBC show 'Balamory'. Film credits: Harry Potter, Johnny English, Sherlock Holmes, etc.
Miles can keep audiences entertained and engaged at your award ceremony, gala dinner or big event with his with and unique sense of humour
Speakers and Hosts, Presenters,Comperes and Event Hosts, After Dinner and Comedy Hosts, Celebrity Speakers

Miles Jupp started performing stand-up comedy in 2000 when he won both So You Think You’re Funny and Leicester Mercury Comedian of the Year. He became a regular performer on BBC Scotland’s Live Floor Show and he earned a nomination for the Perrier Best Newcomer award for his debut solo show 'Gentlemen Prefer Brogues'.

He has contributed to many Radio 4 shows such as Arthur Smith’s 'Balham Bash', 'The Vote Now Show' and 'Loose Ends'. As well as creating Miles Jupp’s 'Real World', he presents 'It’s Not What You Know' and during 2015 he became resident host of 'The News Quiz', taking over from long-standing Sandi Toksvig. Miles writes and stars in 'In and Out' of the Kitchen on Radio 4, which premiered its fourth series and made its debut as a television series in 2015.

Miles returned to stand-up in 2007 with a new show 'Every Day Rage' and 'Dinner Party Chit Chat' and continued to write and perform in the Edinburgh Fringe until 2010 when he presented the critically acclaimed 'Fibber in the Heat'. The show toured in 2011 and 2012 culminating in a sell-out performance in London’s West End and a book release, published by Ebury Press in May 2012.

On television, Miles continues to work as a comedian and presenter, appearing in such shows as Michael McIntyre’s 'Comedy Roadshow', 'Have I got News For You', 'Mock the Week', 'Never Mind the Buzzcocks', 'Argumental', 'Just a Minute', 'Live At The Apollo' and Stewart Lee’s Comedy Vehicle.

As an actor, he co-stars in the award-winning BBC2 sitcom Rev, which is now in its third series. He’s also well known for performing in 'Gary: Tank Commander', 'The Thick of It' and the children’s BBC show 'Balamory'.

Miles’ film credits have gone from strength to strength, appearing in international features such as 'The Monuments Men' directed by George Clooney, 'The Riot Club', 'Last Sparks of Sundown', 'Rosewater', 'Sherlock Holmes', 'Made in Dagenham', 'Johnny English: Reborn', 'The Look of Love' and 'Harry Potter and the Order of the Phoenix'.

In 2012, Miles made his National Theatre debut in Alan Bennett’s People and in 2015 went on to perform in the Theatre's critically acclaimed production of 'Rules for Living alongside Steven Mangan'. Miles hit the road from September this year through to early Spring 2017, with his brand new show 'Songs of Freedom'.

Invite Miles to Host your Event

If you're interested in having Miles Jupp hosting your event, contact us today and make an enquiry.

" This show goes from strength to strength "

" A new level of middleclass angst in comedy "