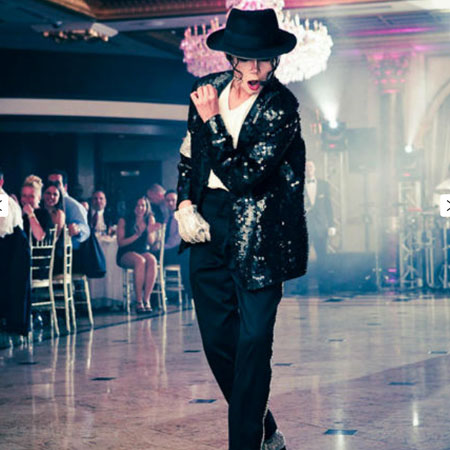 REASONS TO BOOK
Captures the essence of the most influential pop artist of our time
The closest thing to the real Michael Jackson you will get
Team of talented performers, singers & dancers with premier choreographer
As seen on ABC News, TLC's Four Weddings, VH1's Love and Hip Hop and MTV
Based in New Jersey & available to perform at events worldwide
Cabaret and Stage Shows, Tribute, Lookalikes and Impersonators, Musical Shows, Michael Jackson

This award winning Michael Jackson Tribute Company provide Michael Jackson entertainment for all occasions.  Their Michael Jackson tribute shows captures the essence of one of the most influential pop artists of our time, and is available for all events such as corporate, awards banquets, session openers and closers, private events, weddings, festivals, fairs and concerts. They have a team of talented performers, singers and dancers, with a premier choreographer.

Overall service by their staff has been proudly ranked 5 stars by their previous clients.  As seen on ABC News, TLC's Four Weddings, Bravo TV’s Real Housewives of New Jersey, VH1's Love and Hip Hop and MTV.  In past performances, this MJ tribute headlined the 2011 New Years Eve Fire and Ice Spectacular in Anchorage, Alaska and performed at Citi Field in NY at an Enterprise Corporate Event.  He was honoured to perform at the 2012 Bermuda Nights in the Park Summer Concert sponsored by the Bermuda Department of Tourism.

They offer a choice of several entertainment choices for all occasions:

" A true professional and entertainer. The pre show for our movie premiere of King of Pop Killer made the audience go wild with excitement and applause! Thanks and we look forward to working with you on our show! "

" Perhaps the quintessential Michael Jackson impersonator and has the King of Pop's moves down to a science. He danced on the Vinny Vella Show on Wednesday, September 5, performing a great routine to "Beat It," then really let it all out when the dancers put on zombie makeup for a faithful rendition of "Thriller"! "

" We had him at our Christening and was incredible! We danced all night, the music was fantastic, and it was such a great time! "