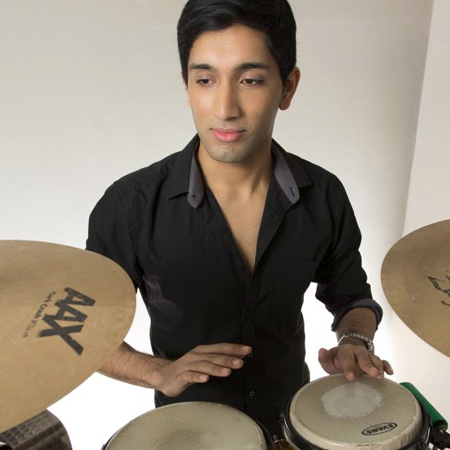 REASONS TO BOOK
One of the most sought-after percussionists in the night-club industry
Played at world renowned venues: The Egg Club, HMV Ritz, Sankeys...
Performed at Calvin Harris & Laidback Luke’s Pre-party in IBIZA Rocks
Can perform as part of a trio with a saxophonist and DJ
Based in Leeds & available to perform at events worldwide
DJ with Musicians, Live Music and DJ, Drumming and Percussion

In little over two years Kami has become one of the most sought-after percussionists in the night-club industry.

Due to high demand Kami has performed over 450 nightclub performances across the UK & Europe. His talents are so in-demand that he has even performed at Calvin Harris & Laidback Luke’s Pre-party in IBIZA Rocks. In addition, he has supported Alex Gaudino at Pacha London, Fierce Angels, Hed Kandi and toured the UK with Randy Ron/ BBC Radio One DJ Danny Howard. Following these high profile performances, Kami has gone and performed in world renowned venues including: The Egg Club, HMV Ritz, Sankeys, Ibiza’s Base bar, Cafe Sydney & Hush nightclub. Along the way he has supported major acts including: K-Klass, Artful Dodger, Coolio, Ms Dyamite and Kissy Sell Out!

Able to provide a full live percussion show (not just bongos!) with drums, cymbals, cow bells, chime bars – this guy gives you the works. Playing a wild blend of western and Latin rhythms, he will take your guests and event to a whole other level. He is a perfect complement to a standard DJ performance, infusing their sets with splashes of vibrant percussion that will hit the right note at any event.