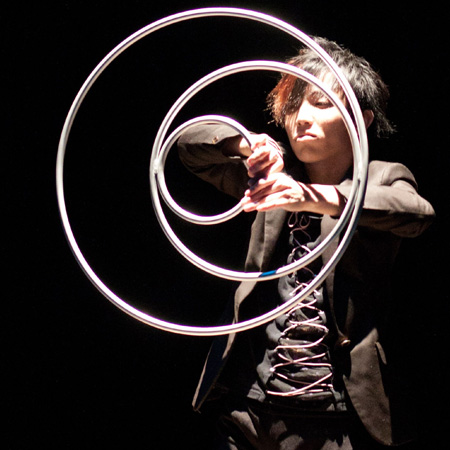 REASONS TO BOOK
Incredible optical illusionist has wowed audiences throughout Asia/Europe
Performed on TV worldwide incl Nihon Television The World Best Showtime
His incredible ring manipulation act has attained 2 million youtube views
Can change his rings to the shape of the company’s logo
Based in Tokyo & available to perform at events worldwide
Cabaret and Stage Shows, Magic and Illusion, Magic and Illusion Show, Unique Acts, Speciality and Novelty Acts, Illusionist

Tokyo based Optical illusionist Ouka performs a high impact and unique illusion show that is perfect for international corporate events and product launches.  His incredible illusions have wowed audiences throughout Asia and Europe.

In the past he had won the Japanese diabolo national championship and has also performed regularly as a magician throughout the world.  His successful career as a diabolo performer and magician led him to create his incredible Ring Manipulation act.

Various media around the world including the American broadcasting company cbs.com have featured his unique and mysterious art piece, and his video on youtube has attained more than 2 million views.

Ouka has performed on over 20 TV shows worldwide including Nihon Television "The World Best Showtime!”  He has performed at the China International New Media Short Film Competition as a guest artist. He presented a memorable ending by changing his rings to the shape of the celebration's logo mark. The Chinese national broadcast provided live coverage of his act.

Ouka also performed at Le Plus Grand Cabaret du Monde produced by the French national television. Unlike many other performers, they broadcasted his act twice.

In huge demand with events worldwide, Japanese illusionist Ouka has performed at many celebrity parties including; the marriage party of Toru Fujisawa, the author of GTO, a private party of Mr. Higuchi, the CEO of Microsoft Japan, a reception party of ELLEgirl, a famous Japanese fashion magazine, and many more.