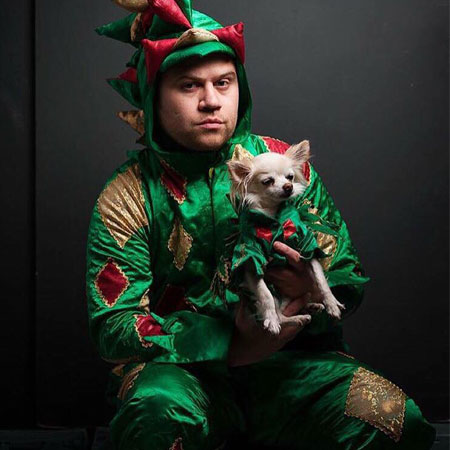 This is a unique magic stage show unlike anything that you will have ever seen before. Completely original in its conception, the hilarious deadpan character of Piff the Magic Dragon will delight audiences as he takes to the stage with his Chihuahua Mr. Piffles.

His witty comedic style and baffling tricks – not to mention his fantastic dragon costume – make for an exciting and funny magic act that has wowed audiences and judges on season 10 of ‘America’s Got Talent’ and audiences at Sydney Opera House, Shakespeare’s Globe, London’s O2 and Radio City Music.

Our Las Vegas based comedy magician offers a magic stage show packed full with hilarious comic moments, plenty of audience participation and classic comedy magic tricks with cards, flowers and more! A natural performer, he immediately endears himself to his audience ensuring that every show is a hit.

One of the funniest and most unique comedian magicians on the circuit today, book our Las Vegas comedy magician as after dinner corporate entertainment, for theatres, festivals and much more.

Top Tip
Our fantastic comedy character and magician also offers a unique magic stage show presented as part magic show, part game show, which sees the audience split into teams who must fight for points and prizes! This is perfect to book for conferences and corporate away days.

Talk to one of our entertainment coordinators to find out more.