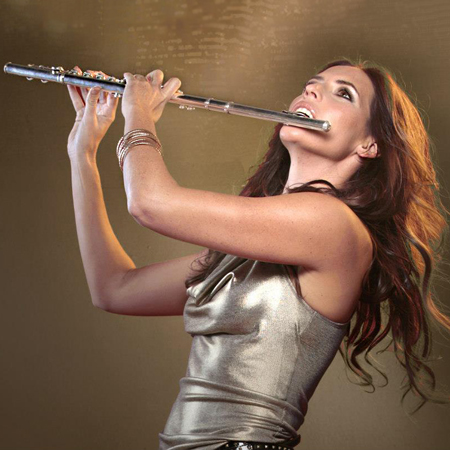 REASONS TO BOOK
A unique flute player praised for her phenomenal techniques and interpretations
Groundbreaking slide flute turns an under appreciated instrument into a spectacle
Vast repertoire spans from classical and jazz to pop and contemporary songs
Creates a memorable live music experience at anything from weddings to corporate events
Based in Cape Town and available for events all over the world
Saxophonist and Flute, All Female Bands, Live Music and DJ

Pop Rock Flute South Africa is a virtuoso female flute player that has been rocking the live music scene and entertainment industry with a compelling approach to performing with this under-appreciated instrument. Using a slide flute, Pop Rock Flute South Africa is an experience like no other that breaths new life into an instrument you wouldn’t normally book for an event.

The virtuoso female flute player is the group leader of the multi-award winning Pop Fusion Flute & String Trio as well as offering intimate duets and solo performances along with high-quality backing tracks. The female flute player has featured on several albums, performed in over 15 countries both solo and with her trio and won numerous awards for her work across the board.

This unique flute player has an extensive repertoire that includes an array of classical, instrumental jazz, world music, pop as well as wedding favourites. Using the slide flute she transforms well-known songs into her own unique works. Whether you want classical crossover or pop songs, this unique flute player is guaranteed to impress.

Specialising in using the slide flute to bring an edge to live shows, Pop Rock Flute South Africa will delight guests with songs such as Ed Sheeran's Shape Of You, The Beatles' While My Guitar Gently Weeps, Santana's Europa and Nina Simone's Feeling Good.

If you're looking to impress your guests with a truly unique flute player speak to our team about Pop Rock Flute South Africa. Highly suited to anything from weddings to corporate events, this is a virtuoso flute player that never fails to make an impact.