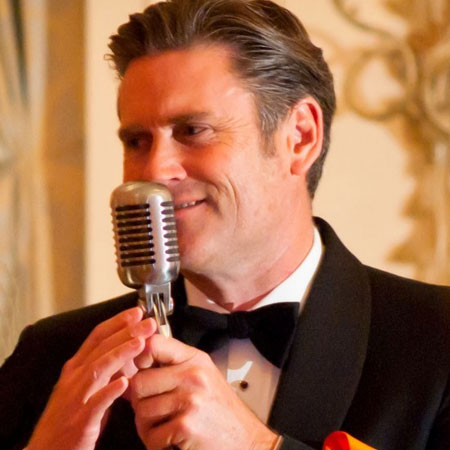 REASONS TO BOOK
One of the top rated Big Band acts in the US!
Barbara Sinatra described lead vocalist Dave as 'Wonderful'
Available either to backing tracks, showgirls or with live big band
Highly recommended for corporate events, casinos & weddings
Based in Dallas, TX and available to perform worldwide
Jazz,Swing,Blues and Jive, Musical Shows, Live Music and DJ, Tribute, Lookalikes and Impersonators, Rat Pack, Cabaret and Stage Shows

This is one of the top-rated Big Band acts in the US! So remarkable in fact, that lead vocalist 'Sinatra' Dave has delivered command performances for Barbara Sinatra (Frank's widow) AND Jeanne Martin (Dean's widow). Exciting, entertaining and unforgettable, this show is a must-see!

Dave is a featured entertainer on Carnival and Royal Caribbean cruise lines and travels the country for public and private events. This acclaimed performer is the "best of the best" - a stunning tribute to Ol' Blue Eyes!

He's not an "impersonator", but he vividly captures that smooth sound and flamboyant style. Close your eyes, and it's Frank! In fact, after seeing his performance, Barbara Sinatra called it "Wonderful!". The resemblance is so remarkable that some insist he's lip-syncing.

Dave's show consists of 3 to 4 song sets of classic Sinatra hits - plus a power-packed selection of Big Band dance numbers guaranteed to inspire and energize! Shows can last anywhere from one to three hours.

This show is available either to backing tracks or with a LIVE band.  Also available as a Rat Pack show with Dean and Sammy!

" After searching for months to find someone who could deliver this voice and style of music, we were speechless when we found Dave and his band. His voice was so captivating and the band was absolutely flawless! I was so pleased to have Dave and the entire band at our wedding reception. They did a marvelous job! Friends and family were so impressed and amazed with Dave's performance and raved about it for days! Everyone was outstanding! I would highly recommend Dave for your next event! Thank you for making my wedding a dream come true! "

" We were so thrilled with Dave and the Band’s performance! Honestly, in the thirteen year history of this event, guests have never stayed that long into the evening and we attribute it to how much fun everyone was having. The buzz around the room was electric! We appreciated Dave’s willingness to perform a table-side serenade (incidentally, that was the highest selling auction item at the event!) and that during the rest of the evening, he traveled through the crowd and gave those at the back of the room “front row” seats too. During set up, Dave and Jim were so sweet and accommodating – and so professional in their work. They set up their equipment quickly and efficiently and needed little from us (we were so busy, I felt like we were neglecting them!). We couldn’t have been happier. We’re hoping to make Dave and the Band a tradition for years to come. Thanks again for working with us to create a magical and memorable event! "

" I am ever so pleased that you keep his memory alive and honor him with this festive evening. Thank you for that! "