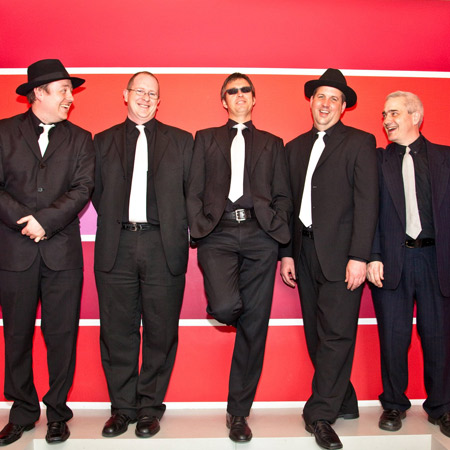 REASONS TO BOOK
Swinging their way through the greatest swing numbers of all time
This is the band to make your feet tap and your hips sway
Consists of some of the finest professional musicians in the South West
Repertoire also includes motown, soul and funk tunes
Based in Devon & available to perform at events throughout the UK
Live Music and DJ, Jazz,Swing,Blues and Jive

If you want that classic swing thing made famous by Frank Sinatra, Dean Martin & Sammy Davis Jnr., as well as several of the modern swing greats such as Robbie Williams, Michael Buble & Jamie Cullum, then this Rat Pack Tribute is the one for you. Swinging their way through classic tunes such as Fly Me To The Moon, I Get A Kick Out Of You, Mr Bojangles, Mack The Knife and New York, New York, this is the band to make your feet tap and your hips sway.

The group are also a very versatile band who are equally at home playing many other styles including motown, soul, funk and more up to date pop, ensuring that your evening goes with a bang as well as a swing.  The band stars the one & only Adam Moran on lead vocals, one of the leading swing singers in the South West.  The rest of the band comprises of some of the finest professional musicians playing in the South West today, who have been playing together and with other bands since 2001, building a strong reputation throughout the region.

" Thank you to you and the other members of the band for providing such an amazing performance at our wedding on Sat 25th April 09. We had an absolutely amazing evening as did our family and friends present. You are still being talked about today!! You covered all our favourite songs and more. We will remember forever how amazing it was. We didn't want the evening to end and how can we forget most of our drunken family members dancing to New York, New York and like apes to the Jungle Book "I Want To Be Like You"….. priceless….Thank you for making it such a special and memorable day. "

" The band performed at our St Lukes Hospice May Ball and our guests instantly took to the dance floor.The band were truly professional as they arrived and set up with no problem, which made it so easy for us.The variety of songs they played were brilliant and they helped to make it a memorable night for everyone. The entire event was fantastic and St Luke's rasied an amazing £9,000!! "

" I just wanted to say a BIG THANK YOU to you and the guys for NYE. Feedback has so far been excellent and I'm told you guys went down a storm!! "

" The band produced a highly entertaining set at the 2008 Teignmouth Jazz Festival. With their high energy blend of Rat Pack style swing, soul & blues, and with their infectious humour they developed a close rapport with the audience who were left calling for more at the end!!! "

" A high class band in a high class venue, at Claytons in Barnstaple, North Devon. Appearing as part of the North Devon Festival 2009 the audience were treated to high octane performances of classics such as Fly Me To The Moon and I Get a Kick Out Of You. In a modern setting with moonlight lighting effect, the four piece band plus vocalist had everyone dancing in the aisles to the Film 2009 theme tune and singing along to Minnie The Moocher. If you get a chance to mooch along to see them, it's a must. "