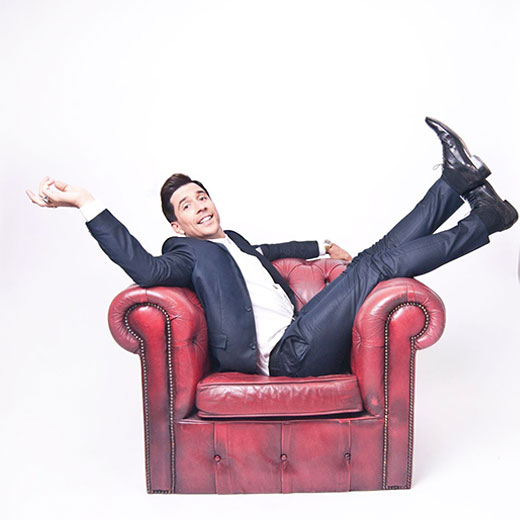 Reasons To Book
Hilarious comedian Russell Kane is one of the UK's best comedians and awards hosts, making him ideal for a range of events
Previous appearances include at the Hammersmith Apollo, Big Brother's Big Mouth, Staying in and more
The first comedian to win the prestigious Edinburgh Comedy Award and Melbourne Comedy Festival's Barry Award in the same year
Regular viral videos receive millions of views on social media due to their hilarious take on current events
Russell frequently appears in charity-related shows, including Sport Relief and Children In Need
Speakers and Hosts, After Dinner and Comedy Hosts, Celebrity Speakers

Multi-award winning comedian, presenter, actor, author and scriptwriter Russell Kane is best known as the host of three series of BBC Three‘s Live At The Electric, regular appearances on BBC One’s Live At Apollo, BBC Three’s Unzipped, ITV2’s Celebrity Juice and I Am Celebrity Get Me Out of Here Now.

Russell was nominated four times for prestigious Edinburgh Comedy Awards before winning Best Show in 2010. He then went onto make history as the first comedian to win both the Edinburgh Award and Melbourne Comedy Festival’s Barry Award in one year. His award-winning show Smokescreens & Castles was recorded in front of his home crowd in Westcliff-on-Sea’s at the Palace Theatre and released by Universal Pictures in 2011. Famed for his critically acclaimed tours Russell has been performing sell-out shows across the globe.

There is no end to his talents having published his first novel The Humorist which was nominated for a literary prize, he has also written, directed and starred in three plays two of which have toured, and one, blank verse, which was performed in the main house of the RSC in Stratford-Upon-Avon.

Russell has also captured the social media market by storm with his signature videos, the “Kaneings” in which Russell uses his own unique style to tackle a current topic that’s dominating the news. The Kaneings regularly go viral and to date have received millions of cumulative views.