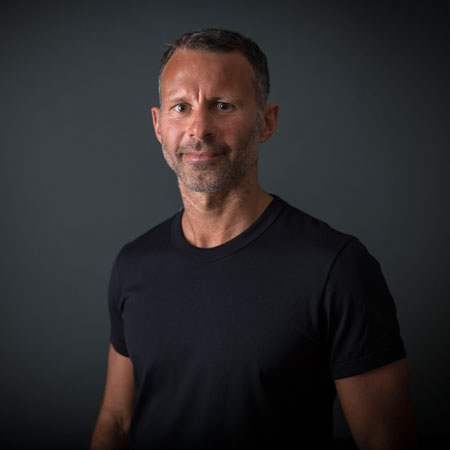 REASONS TO BOOK
One of the English Premier League’s most celebrated football players
Audiences will jump at the chance to be in conversation with Ryan Giggs with a fascinating Q&A session
Global football star will share elements of his life, work and passions by answering your questions
Premier League celebrity guest for a whole range of events and occasions
Based in the UK and available for appearances and Q&As around the world
Sports Speakers, Speakers and Hosts

With a record 34 career trophies to his name, Ryan Giggs is celebrated as the most decorated player the English Premier League has ever produced.

A product of the infamous Manchester United Class of 92, Ryan went on to amass 693 appearances for the club, winning 13 x Premier League titles, 2 x UEFA Champions Leagues, 4 x FA Cups, 9 x FA Community Shields, a FIFA Club World Cup and was an integral part of the historic treble-winning side of 1998/99. He has made more appearances and won more honours than any other player in Manchester United’s illustrious history and in February 2018 was appointed the manager of the Wales National Team.

Twice awarded with the prestigious PFA young player of the year award, Ryan was capped 66 times for the Wales National Team between 1991 and 2007, and in 2012 was named captain of the Great Britain football team that competed at the Olympic Games in London.

After Ryan’s retirement in May 2014, his attention turned to coaching and was appointed assistant manager at Manchester United enjoying success alongside Louis Van Gaal winning the 2014/15 FA Cup. He also co-owns Hotel Football with The Class of 92, as well as the successful Salford City FC, who have been promoted 3 times in 4 seasons, as well as becoming a Laureus Academy member.

To book Ryan Giggs for a Q&A session at your next event, get in touch with our team of Entertainment Experts.