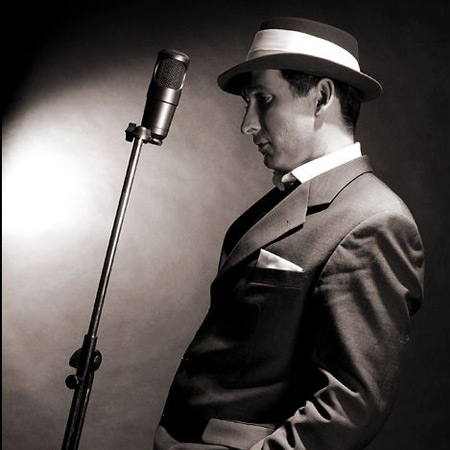 Sinatra Tribute Kevin is a London born jazz-swing singer/ songwriter/bandleader with a charismatic stage presence. He has entertained royalty twice and been booked by many celebrities & sports stars for important private events and has sung several times on TV (E4′s Made In Chelsea, BBC3 & Wedding TV). His exceptional vocal talent has been in demand for TV and radio commercials both in UK and Europe, including a TV advert with Hollywood movie star Naomi Watts and voice-overs for music publishers and for San Pellegrino, PriceDrop.TV. He’s been booked by luxe brands like Hermes, Louis Vuitton for campaigns/promotions in Far East & London and he was star attraction at both the New York & London launches of deluxe book The Rat Pack (by Reel Art Press) and is recommended by no less a figure than the President of SINATRA MUSIC SOCIETY (Ken Barnes).

This acclaimed Frank Sinatra tribute, known for his unforgettable live vocal shows proves time and again why he’s the first-choice Frank Sinatra singer for weddings, functions and corporate events on the scene today. He is favoured by luxury wedding planners, showbiz and sports stars, prestige brands and global corporations, and with his very broad appeal has sang at a hugely diverse number of events and weddings – both large and loud and small and intimate - everywhere from the local Golf Club to glittering ceremonies in European palazzos and chateaux and beyond.

Clients can choose from a vast repertoire of both the well and lesser known of Frank Sinatra’s great music. And throughout the whole of Kevin’s superb live shows he performs supremely swinging, effortless renditions of not just the less challenging songs but also those that are more vocally difficult.

Whether it’s a mix and mingle act, memorable background sets, superb over-dinner entertainment, a wow-factor show or a full dance floor that’s required, be assured of unforgettable live vocals and an entertaining set with a broad appeal, delivered with a superb sense of swing and enormous presence. Perfect for any wedding, party, function or corporate event worldwide.

Contact one of our Entertainment Co-ordinators if you need to more information about this or any other act on our roster.

" Kevin captured Sinatra’s suaveness and charisma and you could imagine Frank, himself, was singing "

" A glorious and honest rendition of Sinatra’s ‘Capitol’ years, brilliant sound by singer and band alike "

" I just wanted to say what a fantastic singer Kevin is as Frank Sinatra Tribute, he made my wedding day go off superbly. People haven’t stopped talking about it and with Kevin singing I achieved the atmosphere I was looking for. Everyone thought he was fabulous so I can’t thank him enough for making my day! "

" While it’s good to see so many Sinatra tribute shows up and down the country, most of them, I regret to say, are pretty poor. But one shining exception is Kevin, a singer with a naturally fine baritone voice, secure intonation, confident phrasing, a most agreeable laid-back personality, and flawlessly performed. You won’t find a better evening’s entertainment anywhere "