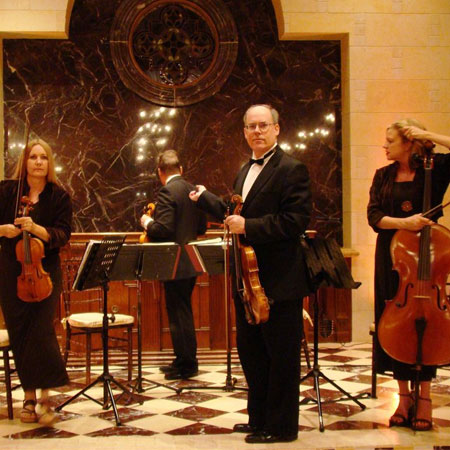 This String Quartet based in San Diego, California has played for thousands of events for more than 25 years. The group was founded by violinist Anna Rose, who has appeared in People Magazine, and provided music for over 75 celebrities.  Co-founder Stephen Ball is a composer and arranger who’s work has featured grammy nominated flutist Lori Bell.

The String Quartet recently played in the Orchestra accompanying Jackie Evancho and have played for Presidents of the United States and Celebrities, at a long list of locations such as the Hotel Del Coronado, Sea World, Hyatt, St. Regis, and the Ritz Carlton to name a few.  The quartet is recommended by top event planners and venues. Whether a marriage proposal with one violin, a garden wedding with String Quartet, to Symphony Orchestra, the greatest compliment is when the same family uses the group for the weddings of all five daughters!

" The music at our wedding last Saturday was perfect. Your “part” in this occasion could not have been any better. The beautiful tone of the ceremony was set with your expert musicians. The blend of music was lovely. "

Mother of the Bride