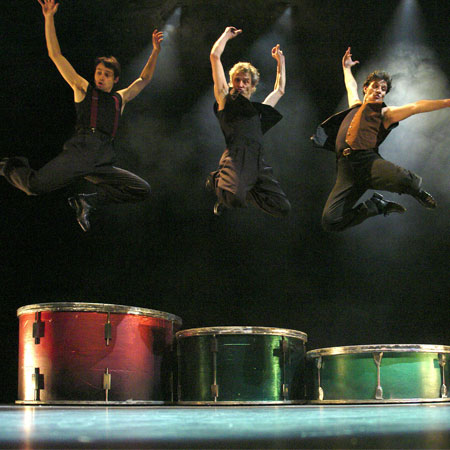 This Barcelona based show mixes African percussion, tap dance, voice and sand dance. For more than an hour, six performers play with their roles, exchange their abilities and mix their rhythms to achieve a surprising performance which is original, fresh and so full of energy that it makes the audience want to get up and dance, seduced by the magic of what is happening on the stage.

Mixing the most modern techniques of tap dance with a range of percussion instruments, the show has been on tour all over the world, achieving applauses and praises of all the public. From its debut in 2000 in Barcelona and Edinburgh (Fringe Festival), the show has obtained the maximum and unanimous appreciation of the press, with 5 stars articles.

The Tap Dance & African Percussion Band have provided the entertainment at conventions, award ceremonies, conferences and a great variety of events for brands as NISSAN, DAMM, SAMSUNG, TELEFÓNICA, BMW, RON BRUGAL, FARMA-PROJECT, EAT OUT, FERRERO ROCHER, ENDESA, AMERICA'S CUP among others. They have participated in the GOYA AWARDS ceremony 2000 (TV1), in the program of TV AZTECA (Mexico) Beijing 2008 and in the GAUDI AWARDS ceremony 2009 (TV3).

This versatile show can be adapted according the needs of any event, creating a show for each occasion.