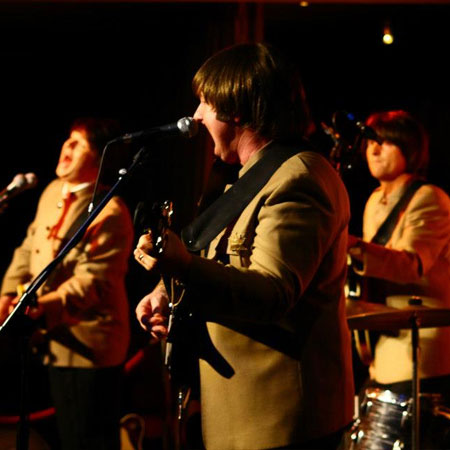 REASONS TO BOOK
Relive the sounds of the 60's with this leading Beatles tribute
Excitement, raw energy & authentic sound of the original Fab Four
Performed for the actor Michael Douglas & Prime minister of China
TV appearances on Sky spectacular and BBC's Children In Need
Based in the UK & available to perform at events worldwide
Tribute, Lookalikes and Impersonators, Themed Entertainment, Beatles, 1960s and 1970s

Relive the sounds of the 60's with this leading Beatles tribute band.  Performing to ecstatic audiences since they formed in 1997, they re-creating the excitement, raw energy and authentic sound of the original Fab Four.

This Beatles tribute are in constant demand and their hard earned reputation for authenticity and attention to detail has taken them around the world. They have performed for the Jordanian Royal Family, the Hollywood film actor Michael Douglas and the Prime minister of China to name three of the better known!

They have played at such prestigious venues as The Cafe Royal (a sell out seven night residency), Skibo Castle (Madonna and Guy Ritchie's wedding venue), society weddings at Penshurst Place in Kent and every major university in the country.

The Beatles tribute are available for hire to perform at a wide range of events, from theatre concerts and corporate functions, to weddings and private parties.

" It was a great night, if you go to see Love by Cirque du Soleil or Let It Be in the West End, you may see flashier sets but what you will not get is the soul of the band, these guys recreate that scally humour as well as the fantastic material brilliantly "