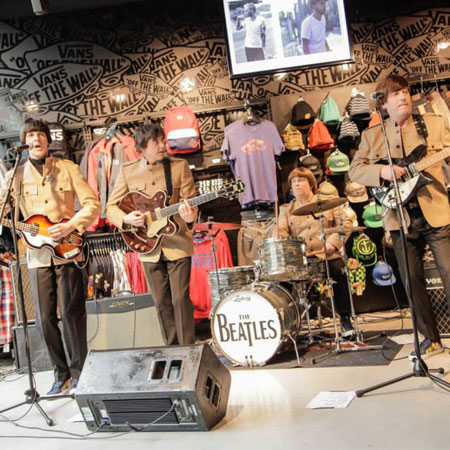 REASONS TO BOOK
One of the UK’s premier Beatles tribute bands
Have mastered The Beatles’ mannerisms & on stage humour
Use authentic amplifiers & original instruments
Performed at the Hard Rock Cafe London & Pinewood Film Studios
Based in the UK & available to perform at events worldwide
Beatles, Tribute, Lookalikes and Impersonators

Formed in 1997, this Beatles tribute band have over 15 years of experience performing at leading venues across the UK and abroad. They have had the privilege of performing at the Hard Rock Cafe in London, Pinewood Film Studios, The Palace Hotel Manchester and Danson Park Festival in Kent, and working with top line entertainers such as Brian Conley, Noddy Holder and Mike Reid.

Known as one of the UK’s premier Beatles tribute bands they are dedicated to recreating an authentic live Beatles experience: from using authentic Vox amplifiers and original instruments, to perfectly mastering The Beatles’ mannerisms and on stage humour.

The band work hard to reproduce all The Beatles songs with an astounding accuracy that has audiences wondering if they are actually listening to original recordings. Their repertoire consists of all of The Beatles hits from ‘A Hard Days Night’, ‘She Loves You’ and ‘Yellow Submarine’ to ‘Hey Jude’ and ‘I Should Have Known Better’.

This Beatles tribute gives a fantastic authentic live Beatles performance that no Beatle fan would want to miss!

" … thank you for an absolutely superb performance on the night of our wedding. Everyone present thoroughly enjoyed the band’s entertainment - as you could probably tell from the fact that the dance floor was packed throughout your performance - and you guys have been talked about a lot since! "

" ...thank you all so much for making our wedding so very special. We had a fantastic time - everyone said how much they enjoyed themselves… "