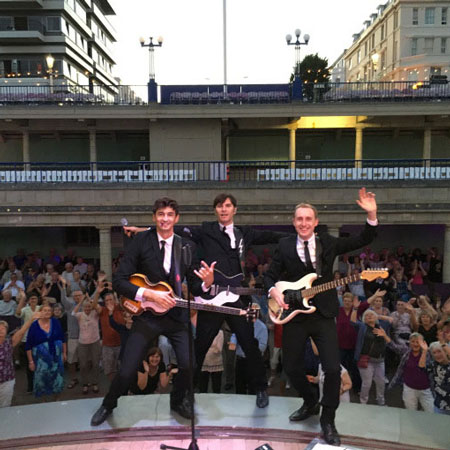 REASONS TO BOOK
Top party band play best-loved hits from the 50s to today
Customisable sets, with possibility to select a single decade for your themed party
Highly interactive band with wireless guitars can roam your party
Authentic vintage costumes complete the look and can be changed
Choreographed show means they can be centrepiece, roaming act or both
1960s and 1970s, Beatles, Cabaret and Stage Shows, Musical Shows, Cover Bands, 1950s and Rock and Roll, 1980s and 1990s, Live Music and DJ, Tribute, Lookalikes and Impersonators, Themed Entertainment, 1920s and Vintage Music

D you want to throw a themed party but unsure which decade to choose? There’s no need to go through the hassle of choosing; just book the 20th Century Party Band and get them all! Taking you on a musical journey through the sounds and styles of the last seventy years, this supremely talented band play the best loved tunes from the 1950s, 60s, 70s, 80s, 90s and noughties in authentic costumes.

As impresarios as well as gifted musicians, you’ll think the Beatles and Buddy Holly themselves have decided to play your event. With a line-up capable of recreating the diverse sounds of vintage pop music, the two guitars, bass, drums and female percussionist and dancer will have you tapping your feet in anticipation.

The band’s repertoire is very large and clients can select which tunes they want as well as make special requests. All of the 20th Century Party Band’s equipment is wireless, so they can roam around your party playing their set as easily as get up on a festival stage and entertain thousands. In fact, they could do both!

If you do have a particular decade in mind, they are able to offer complete sets for each of the decades listed above (as well as a 1920s set). With access to a vast array of genuine vintage costumes, your themed 80s party or product launch could have a band that look and sound nothing short of the real deal.

This is a party band with a difference. Having developed their repertoire and act over many years and collecting hundreds of costumes in the process, this band can cater to any taste and specialise in the most popular niches of recent history. Have a look at their impressive client list and an abridged set list to ensure you’re getting a band of the highest esteem.

To book 20th Century Party Band, please contact one of our specialist entertainment advisors who are on hand to help.

" Thank you to the band for an excellent performance at the Goodwood Revival Meeting 2016. We were particularly impressed by the band’s enthusiasm and interaction with the audience during sets. The band arrived in plenty of time, paying full attention to the access and set-up instructions provided. With over 200 performers on site, we were extremely pleased with the band’s professionalism and ‘no fuss’ approach! "

" The band were so friendly and relaxed when they arrived which helped put me at ease. The show was a sell out! As soon as the band started playing the majority of people attending were on their feet, dancing and enjoying the music. Throughout the night we kept hearing about how great the band were and how good the music was. The band took the time after the show to talk to everyone that had attended and pose for photos. "