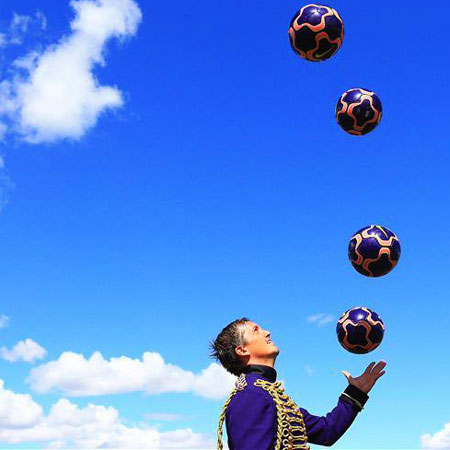 Impress your guests with Unique Football Juggling Act. The Argentinian born performer, now based in Spain, has created a one of a kind football juggling act that incorporates football freestyling, acrobatics and a good dose of comedy. He is a natural showman and always delivers a high impact show.

Highly acclaimed all over the world, the Unique Football Juggling Act has travelled to over 50 countries including Dubai, Belgium, Turkey, Hong Kong, Australia, India and the USA. Our performer is a five times Guinness World Record holder for football tricks such as most rolls around the face in one minute, most footballs juggled and the longest time to spin a football on the forehead.

The football juggler has devised several shows including:

Football Freestyling - A very versatile and impactful performance that has won several awards, featured on television and won him the title of performer of the year on Sweden’s Rampljuset TV competition. Variable in length, this features football tricks, juggling and more.

Contact our team of Entertainment Coordinators to find out more or to book the Unique Football Juggling Act for your upcoming event.