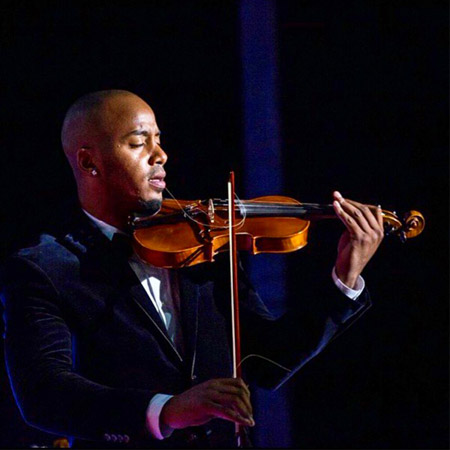 Gaining international recognition as part of the brother dual, “Nuttin’ but Stringz”, helped bring Damien to the forefront of the music industry and solidified his relationship with fans. Creative differences forced the partnership to split allowing Damien to form his own path as an adept musician. Moving forward with an extensive list of high profile events, Damien professionally delivered his unique sound while gaining an international audience. Damien created a demand for his signature sound by time after time delivering an intense melodic interpretation of popular songs and classical favourites thus affording himself the most elite concert engagements.

Damien's performance at the 2008 Hip Hop Inauguration party for President Barak Obama solidified a new fan base for the string musician.  In December of 2013, People Magazine followed as he packed his violin and travelled to Moorestown, NJ delivering a flawless duet of “Mirrors” by Justin Timberlake in hopes to raise funds for Lymphatic Malformation research. Impacting those along his blazing trail, Damien also found time to appear on WE T.V., partnering with David Tutera on “My Fair Wedding”. Making dreams come true with every performance has overwhelmed this award winning violinist and has humbled him to opportunities that as a young boy he never would have imagined.

Damien adds to his extensive resume, the royal family of Dubai and the over 100,000 followers who downloaded his remarkable album released in May 2013. Whether he’s selling platinum albums or creating a market with his passionate skill set, Damien continues to prove that his evolving career is flawlessly integrating into the main stream.

" There wasn't a single person left in their seat "

" He was personable, relatable, he spoke directly to our audience, we will have him back next year "

" To keep it short and sweet....Exhilarating "