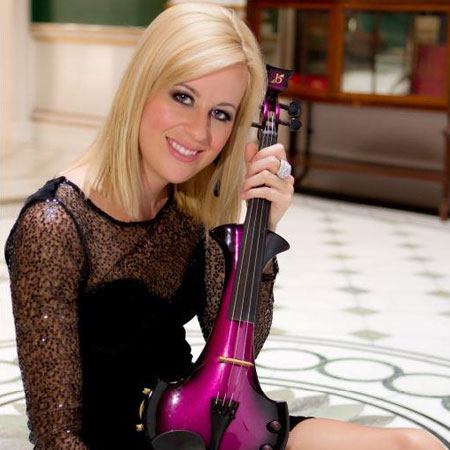 Hayley’s violin studies took place in Germany where she studied for 4 years at the Hochschule fur Musik Würzburg with the eminent Russian professor, Grigori Zhislin. Since her graduation her career has taken off at an amazing rate and every year has brought new and exciting engagements. Recent performances include:

- Performing for the top tennis players of the world at the ATP Men's Open in Doha, Qatar in January 2015
- Opening the Gala New Year 2015 Celebrations at the Jumeirah Beach Hotel, Dubai with a solo performance on electric violin
- Playing in the live band for X Factor 'Big Band Night' in November 2014
- Extensive touring in 2012/2013 with Lana del Rey, George Michael and Rod Stewart
- Performing as part of the BBC Concert Orchestra for the Queens's Diamond Jubilee Concert at Buckingham Palace in June 2012, accompanying artists such as Robbie Williams and Kylie
- Performing with Emeli Sande at the Brit Awards 2013 as part of Wired Strings
- Leading the violin section for Adele's highly acclaimed Royal Albert Hall concert in 2011 as part of Wired Strings
- BBC Radio 2 'in Concert' shows with Emeli Sande and the Stereophonics

As an orchestral musician Hayley held the position of Principal 2nd Violin with Northern Ballet for 7 years. She also plays regularly with many UK orchestras such as the BBC Concert Orchestra, the City of Birmingham Symphony Orchestra and English National Ballet as well as in the pit orchestras for London's West End Shows such as Phantom of the Opera and Les Misérables.

An experienced and confident public performer, Hayley has toured extensively in the UK, Europe, the USA, Canada, South America, the Middle East and Asia. She has played at all major UK concert venues including the Royal Albert Hall, Wembley Stadium, the O2 Arena and the world-famous Abbey Road Studios as well as many prestigious international venues such as the Emirates Palace in Abu Dhabi and the Beau Rivage Palace in Lausanne, Switzerland.

As a session violinist Hayley has recorded and performed live in concert and on TV shows with numerous pop acts such as Take That, Oasis, Adele, Kanye West, Beyonce, Celine Dion, Ronan Keating, Paul Weller and Brian May. Most recently as part of Wired Strings she has recorded hit albums with The Script, Emeli Sande, Cee Lo Green, Adele and Noel Gallagher.

Hayley also excites audiences across the globe as a Solo Electric Violinist as well as performing as Lumina the Laser Violinist (www.laserviolinist.com). Recently she has performed on electric violin for corporate events in Orlando, Dubai, Paris, Taipei, Warsaw, Singapore, Kuwait, Toronto and Berlin.