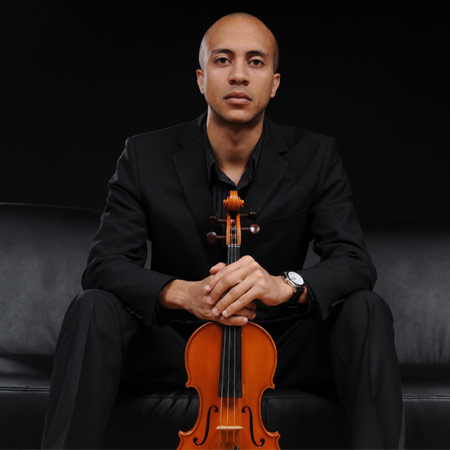 REASONS TO BOOK
One of the top freelance violin and viola players in the UK
Plays with the Heritage Orchestra and London Contemporary Orchestra
Performed for Michelle Obama upon her arrival at the 2012 Olympics
Has performed alongside Leona Lewis, Paloma Faith, Il Divo and more
Based in London and available to perform at events worldwide
String Quartets,String Trios and Solo Strings, Live Music and DJ

Violinist Miles is a freelance violinist and Viola player currently performing with many orchestras including, the Heritage Orchestra, London Contemporary Orchestra and the Urban Soul Orchestra where he is a frequent Leader and Director.

With these ensembles and many more, he has played around the world and in most of the large UK concert venues, including The O2 Arena and The Royal Albert Hall (BBC Proms). Miles has played on many sessions at Abbey Roads Studios and other top recording venues. Performing with artists such as Tim Minchin, Professor Green, Muse, Mary J Blige, Matt Cardle, Paloma Faith, Il Divo and Leona Lewis.

As the leader of the Koko Quartet, Miles has performed chamber music recitals around the country including a performing for the First Lady, Michelle Obama upon her arrival at the 2012 London Olympics.

The Koko Quartet also hold a residency at Lords Cricket Ground and have created a Jazz collaboration project with the Jay Phelps Quartet recently at Kings Place.

His performances work well to create a perfect environment for drinks receptions, art exhibitions or even virtuosic showcase display.