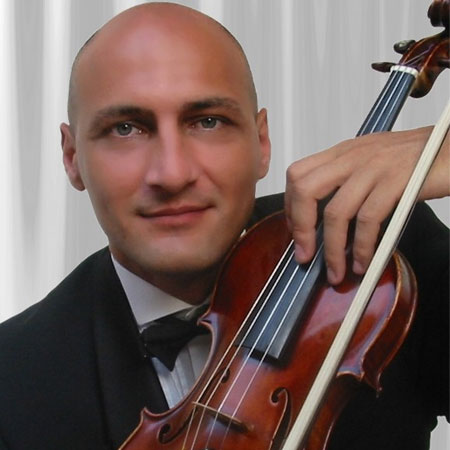 Vincenzo was born in Ancona (Italy), at the age of seven he began studying the piano and later the violin, obtaining his Diploma at the G. Rossini Conservatory of Music in Pesaro, Italy.

Vincenzo alternates his orchestral work with his violin show appearances touring worldwide: Europe, United States, South America, Middle East, Central America, Africa, Asia and Australia.  Since 2001 he has been performing as guest entertainer in cruise ships all around the world with his 'one man show' (Royal Caribbean, Princess Cruise, Holland America, Cunard etc).

In the past years he has appeared in Italy's most renowned theatres such as Rome, Turin, Palermo,  Florence, Milan and Venice with a number of symphonic and lyric institutions: the Orchestra Sinfonica di Roma, Orchestra Ente Luglio Musicale Trapanese, Orchestra Internazionale d`Italia, Orchestra Filarmonica di Torino and the Orchestra del Teatro A. Belli di Spoleto, touring as well through France, Lebanon and Ethiopia.

Vincenzo held for over four years the position of Leader in the Orchestra of the Accademia d`Arte Lirica e Drammatica di Osimo and Orchestra Sinfonica Giordani di Fermo, Italy.

To book Vincenzo for your event contact our team of Entertainment Experts.