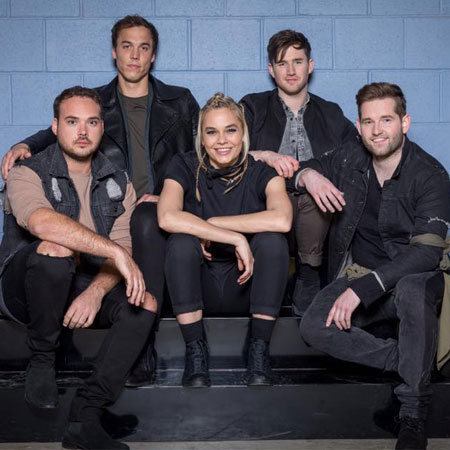 Are you tired of the same old vocal harmony groups? This group of professional musicians and singers combine tight harmonies, rock vocals, beatboxing and jamming guitar to create spine-tingling, unique musical performances that really do set them apart from their peers.

Based in London, the group comprises four male vocal harmony singers and a female beatboxer, and together they make musical magic. With experience performing at countless events across London and internationally, you may recognise them from their appearance on the BBC’s popular TV talent show ‘Pitch Battle’ where they wowed the judges and audiences.

Offering up impressive musical performances that are created just with their mouths and the help of an acoustic guitar. They have a full band sound with minimal instruments. This makes our London vocal harmony group the perfect choice of entertainment for events that have limited performance space and wouldn’t be able to cater to a band or DJ set up.

Their repertoire spans across timeless classics by the likes of Elton John, The Weather Girls, Marvin Gaye and Queen, as well as modern contemporary hits by Ed Sheeran, Jessie J, Bruno Mars and Adele they can create custom set lists to suit a wide range of tastes. Whether they’re performing at a drinks reception or evening party, they are sure to be a huge hit with guests.

Spiralling off of the popularity of films like Pitch Perfect with their vocal harmony and beatboxing, the quintet have even received positive recognition from the Musical Director of those very movies. Deke Sharon said that they group are ‘about to start a musical revolution.’

The group are also available to book as a Male Vocal Harmony Group.

They are hugely popular with audiences of all ages due to their pure vocal performances and modern style.

Get in contact with our Entertainment Coordinators to discuss booking them for your next event.

" Crazy awesome rock vocals, four part harmony, jamming guitar and beatbox = the freshest sound around. [They] are about to start a musical revolution. "