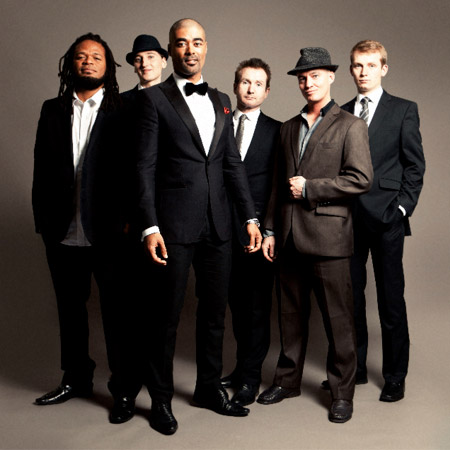 Add a spark of excitement to your event with this high-energy swing band. Their live set is focused on up-tempo hits from the swing dance era of the 1940’s and 1950’s, featuring the likes of Frank Sinatra, Dean Martin and Sammy Davis Jr. They also caterer for a wide range of musical taste by performing swing reinterpretations of hits from 80's, 90's and 00’s. Each song is packed with a wall of sound containing high-powered drum rhythms, blasting brass harmonies, tinkling piano riffs, and an energetic and charismatic front singer. 6 piece swing band perform with a tempo designed to keep dance floors moving, leaving a minimal gap between songs in order to hold the entire dance floor throughout their non-stop show.

Comprised of some of Ireland’s top musicians, they are one of the most in demand swing bands in Ireland. They have performed at Luttrellstown Castle, the Punchestown Races, the Royal Hospital Kilmainham for the Irish president (Mary Mcaleese), the Trinity College Law Society Swing Ball and countless high-profile Irish Weddings. This versatile band can cater to venues and stages of any size; they can downscale to perform as a duo or trio, or upscale to perform as a 10-piece band.

Whether you’re looking for entertainment for a drinks reception or evening party, this band is guaranteed to make your event a success.

" Thank you so much for a wonderful night. We couldn't have asked for a better band and you were a dream to work with. From the initial meeting to the execution on the night, it was amazing. We literally had people on the dance floor from the minute the music started to when it ended. A marvellous evening and I hope to see you again soon. "

" A big thank you to the band for playing at our wedding, you guys really pulled out the stops for us. The night just got better and better as it went on thanks to the band. Everyone thought you sounded amazing and you really got the crowd going early which was great. Hopefully we will get to see you at another wedding sometime in the future!!! "

" The band were amazing, everyone has commented that it was one of the best weddings ever and definitely the music and entertainment was a big part of that. I will be raving about them for a long time to come and hope to get to see them again in the future. "