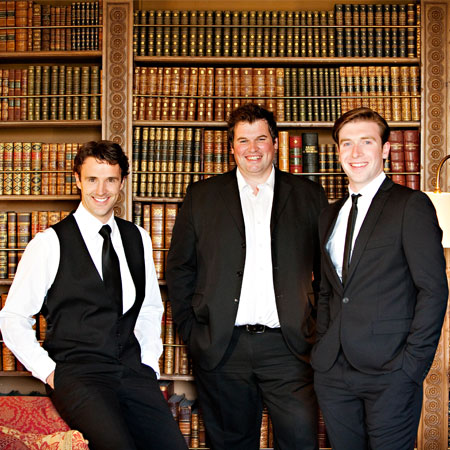 This surprise singing act is comprised incredible West End singers with years of experience appearing on stage in leading roles such as Raoul and Phantom in Phantom of the Opera, Frankie Valli in Jersey Boys and Judas in Jesus Christ Superstar, as well as singers who have appeared in blockbuster films such as Les Miserables, Sweeney Todd and Into The Woods.

These performers have been surprising and delighting guests in equal measure at all kinds of events since 2008, performing at over 1,300 events in over 30 different countries.

They will arrive at your event before any guests, liaise with staff at the venues and ensure that everything is in place for an incredible surprise performance! Masquerading as their characters, these singers will blend in with guests and staff until the show commences usually at the end of the main course! A 45-minute after-dinner cabaret then ensues after the surprise show.

The show is tailor made to suit your specific event (including songs), though characters usual include a French Head Chef, Italian Head Waiter and a third character as a male or female wine waiter or guest  - the details are up to you!

Their remarkable performances will leave guests cheering for more!

" I would like to express my sincere Thanks to you, for your outstanding performance last night. The money raised from last night's event will have a real effect on the relief effort and the contributions of the performers was vital in raising this money. "

" Just a quick note to thank you for your services, as they were exceptional and you delivered everything you promised and more. "

" I just wanted to say a huge thank you to you. Everyone said that the event was the highlight of their week, which is a massive compliment when coming from a room of sceptical project and account managers. "

" You were absolutely marvellous and worth every single penny. Your chemistry was perfect, your voices complimented one another and you really got the crowd going. The selection of songs you did were awesome, and with your sprinkle of comedy, made it a perfect ingredient to the day. "