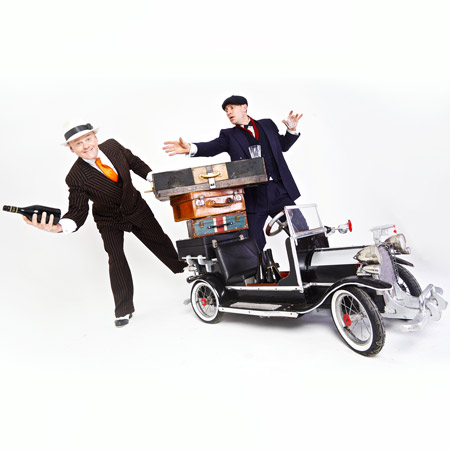 The hilarious 1920s Comedy Gangsters Show is a bit like a cross between Bugsy Malone and Laurel and Hardy. This exemplary silent comedy act is visually captivating and can be enjoyed by audiences of all types anywhere around the world.

Riding in on an amusingly small vintage car, the 1920s gangsters come dressed in stylish tailored suits and precedes to deliver a comedy act with slapstick humour, circus tricks and tap dancing. The silent comedy stage show involves no spoken language but is backed by a fitting vintage jazz soundtrack that lasts the duration of the performance.

Our 1920s Comedy Gangsters Show is a classic double comedy act with juggling, rolla bolla and various comedy capers. Real glass bottles and glasses, as well as vintage suitcases, go flying around the stage amidst a flurry of tap dancing and live saxophone in an all-encompassing cabaret style silent comedy act. There is never a dull moment and your guests will be left with a big smile on their faces.

Having already been booked for the likes of the Spiegeltent on the London Southbank, the Hippodrome Casino and Chatham Theatre, our 1920s Comedy Gangsters Show is a delightful experience for variety or cabaret shows, corporate after-dinner parties, as well as Great Gatsby and prohibition themed events.

Top Tip:
Our charming 1920s gangsters can also be booked for a roaming performance at family-friendly events.

Based in London, the 1920s Comedy Gangsters Show is available throughout the UK, Europe and further afield. Speak to our specialists at Scarlett Entertainment if you would like to book the gangster themed silent comedy stage show for your event.