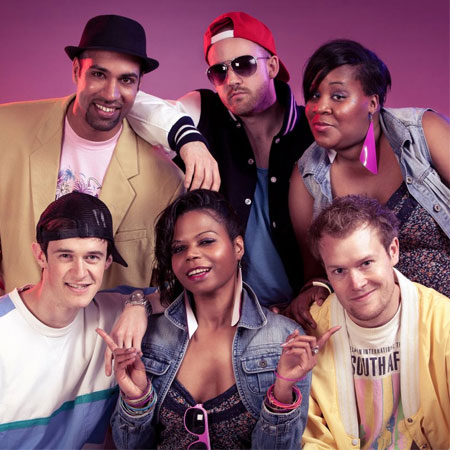 Featuring some of the UK's most in-demand session musicians, this act are a hard grooving 80s band whose dynamic show recreates the energy and optimism of the happiest, brightest, most colourful and outrageous decade of them all.

Their totally live arrangements of some of the catchiest tunes of the era incorporate the classic synthesizers, funky drums, bright guitars and soulful vocals that define eighties music. You will feel like you have travelled back in time and, most importantly, you will dance as if you have, because this band can lay down some heavy beats like they did back then.

They are available for any 80s themed events as well as general parties which require thumping, grooving, floor-filling live music.  So if you want to have some vintage fun, put on your leg warmers and your high-tops and let's get into the groove!

" We weren't sure how an 80s themed band would go down at our annual ball, but they erased all doubt with their superb show. What a night! "

they erased all doubt with their superb show.  What a night!"Helen Stone, The Law Society

" The 1980s band were recommended to us by a friend and they surpassed all expectations. They were all very professional, polite and flexible and played the most energetic, funky two sets of live music we could ever have hoped for. All the guests were on the dance floor within seconds and stayed there until the very end. This was the perfect end to our special day! "

" I saw them play at an 80s night at The Shoreditch bar in London. The venue was packed to the rafters with people dancing and singing along to all those classic 80s hits. What a great atmosphere! I can't wait until the next gig! "

" We needed a band for our 80s themed Christmas party and this band were absolutely perfect for the occasion. The clothes, the dance moves, the synth sounds, and the general atmosphere made us feel like we had really been transported to the 80s for the evening. Amazing! "