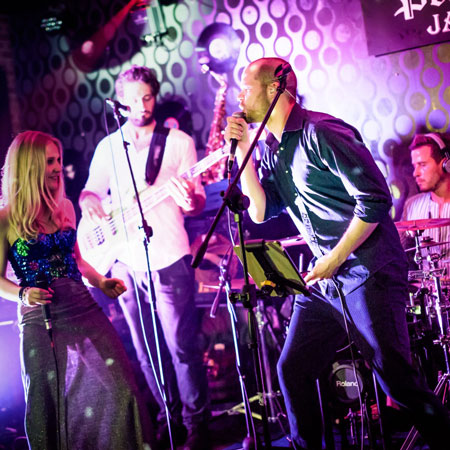 Retro Disco Party Band are a six-piece band from Italy who play live groovy disco music. This Party band has an extensive repertoire that will get your guests dancing all night long with hits from the 1970s and 1980s in addition to dance music of the 1990s and 2000s. Our fantastic live retro dance music is guaranteed to get your guests jiving on the dance floor all night long.

This band will transform your event when they perform and leave their audience begging for more retro party dance music. Expect to hear everything from ABBA, Chic, Sia, Madonna, Gloria Gaynor, Gala, Daft Punk, Modjo, Martin Solveig and Bruno Mars.

Think flower power; colourful shirts, flared trousers and a whole lot of fun. This Retro Disco Party band boasts both a male and female singer and also consists of a guitarist, bass guitarist, drummer and keyboard player. A six-piece band such as this one is rare to come by and this groovy disco band will add that special touch to your event by taking requests and even dressing up in there best swinging sixties and seventies outfits.

If you are thinking of throwing a retro party and need are looking for a six live band to get your event in full swing then look no further because this group is an exceptional choice for disco themed events, nightclubs and weddings.

To complete the groovy theme at your event check out our 1960s and 1970s themed entertainment options to take your guests into a disco inferno.

If you would like some groovy disco live music at your event then you can book our retro disco party band by contacting one of our Entertainment Coordinators.