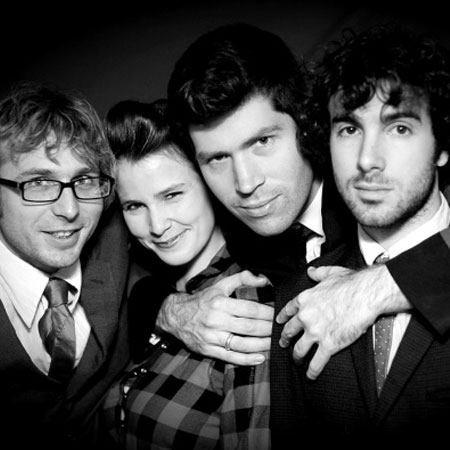 REASONS TO BOOK
Young high-energy band will have you jiving like its 1955
Leap from authentic 50's rock 'n roll to mellow prom-style ballads
Their costumes, instruments and equipment are all bona fide 1950s
Previous clients include Jeep, Chrysler Motors, Chelsea Open Gardens
Based in London & available to perform at events throughout the UK
1950s and Rock and Roll, Themed Entertainment

Sharing a love of all things fifties, this young London based four piece have a musical CV as long as your arm. Working individually with some of the most celebrated musicians on the UK scene, they have appeared at Glastonbury, Secret Garden Party, Edinburgh Festival and on XFM radio. As a band they have set toes-a-tapping at weddings, universities, private parties and corporate functions.

Tailoring performances to suit your needs, The 50's Rock n Roll Band adapt each show to make your special night sparkle. Led by teen-dream James, a charismatic crooner whose velvety voice makes grown women cry, the band will play your choice of fifties favourites and even dedicate a song to you.

Watching the 50's Rock n Roll Band is a vintage visual experience too. Their costumes, instruments and equipment are all bona fide 1950s set pieces. From the dazzling hairclip in Mercedes hair to James’ crackling vintage microphone, every item on stage is infused with a little drop of fifties glamour.

Literally bouncing off the walls with youthful energy, the band make it their mission to have you slow dancing with your dolly bird or jiving like its 1955.

" I just wanted to thank you for an awesome performance at our wedding on Saturday. The music was great, you looked amazing and everyone loved you. Please pass this on to the other members of the band. You were all fantastic!! "

" It was really good to see you and the band last Thursday, Lizzie and I really enjoyed ourselves and thought you guys were great. "

" We just wanted to say thank you so much for playing at the wedding, we had an amazing time and all our guests were very impressed with you guys. You really got everyone dancing...and singing! "

" Thank you ever so much for coming down. if you knew how many people kept coming up to me all night asking "where did you get those guys from". You kept them all going all night! "

" Thanks for doing an amazing set for us on Saturday night. Really appreciated! "

" We lost count of the number of guests that commented at the wedding and since how good the band were. The band made what had already been a very special day step up a gear, turning the evening into the party we hoped it would be. "

Dave and Emma, Bride and Groom

" I just wanted to say thank you so much for a great performance on Wednesday, everyone really enjoyed it, you were the hit of the party! Please pass along my thanks to the rest of the band as well. "

" They were the best bit of what was an amazing evening. Nobody left the dance floor for a single minute they were playing, and for weeks afterwards people asked me who they were and where I had found them. It can be fairly stressful organising a charity event, especially for 350 people, but the 1950s tribute band were 100% efficient and professional. They were the highlight of the party. "

" We’re back from honeymoon and just wanted to drop you an email to say a massive thank you for playing at the wedding. We both had an absolute blast as did all our friends and family and the music was a big part of it. You guys were awesome and we’re so pleased we found you. We’ll definitely be singing your praises for some time to come. "