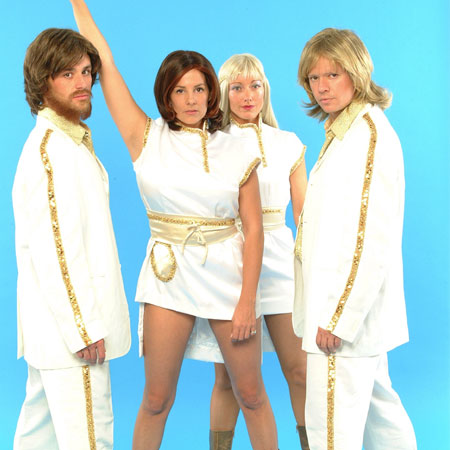 The California based show is a sensational, authentic and truly magical tribute to Abba.  As well as the sound they create being authentic and exciting, the show is visually stimulating and the costume changes and dance routines spectacular, they also interact a lot with their audience, getting them to do dance routines and backing vocals which is one of the key elements that makes their show memorable, they even use flutter fetti cannons (if the venue permits) to give it a real WOW factor.

They have performed worldwide, playing at a variety of events including performing to thousands at festivals, V.I.P. occasions, large and small theatres, fun and lively restaurants, birthday parties, weddings, corporate events,  Xmas parties, cruises, holiday parks... the list is endless!

The band members have worked in West End productions including Mamma Mia!, Phantom of the Opera, Evita, Starlight Express, We Will Rock You and Joseph and His Amazing Technicolor Dreamcoat, they have been leading ladies and men on major Cruise Lines.  Their TV credits include Only Fools And Horses, Peter Kay's Britain's Got The Pop Factor as well as appearing in a host of TV commercials.

Featuring classic hits such as Mama Mia, Waterloo, Dancing Queen, Super Trouper, Money Money, Take a Chance, Winner Takes it all, Gimme Gimme, One of Us, I do I do, Voulez Vous, and Thank you for the Music, the list of smash hit songs goes on and on.  Resistance is futile, you and your guests will be throwing shapes all over that dance floor.

The Abba tribute prides itself on its professionalism as well as its superb show.  They are well organised and reliable as well as great fun!