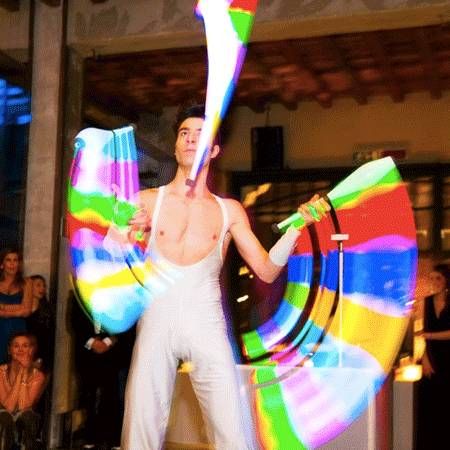 Professional juggler and acrobat from Italy currently living and working in London, who started his professional career at 16 by enrolling at the “Flic” school of circus in Turin until the age of 18, whereupon he decided to leave for Berlin where he could further improve his professional training attending the renowned “Jonglieur Katakomben”.

Over the next few years our professional juggler took part in major events, a highlight amongst which was the 2006 Winter Olympics in Turin. He worked for 3 years in a row in some of the most famous tourist resorts in Egypt as a special guest at New Year’s Eve parties. Our juggling act performed in many of the most important Street Art Festivals all over Italy, amongst which we mention the “Fossano Mirabilia” competition, where he was awarded first prize.

Luca has appeared in various artistic video and photographic productions, in collaboration with internationally renowned artists. In 2009 he won Italian television’s “Rai New Talent” competition and appeared on some of the most important TV shows at that time, including the opening episode of “Domenica In” on RAI UNO.

In 2010 Luca moved to London where he attended the world famous “Circus Space” school and started to work with some of the city's most important event organisers, performing for them not only in England but also in cities such as Paris and Hong Kong.  His work and his passion have taken him to many other countries including Egypt, China, United States, Malaysia and Israel, where he performed as a guest in one of the best known juggling events in the world, the “Israeli Juggling Convention of 2012”.

Since 2014 Luca has been working as a professional actor and juggler regularly performing in the "Benvenuto Cellini" opera alongside other visual art projects all over the world.

Entertainment acts include Juggling, Light Juggling, Fire Juggling, and Hand Balancing and can be combined in a 20 minute variety juggling show.