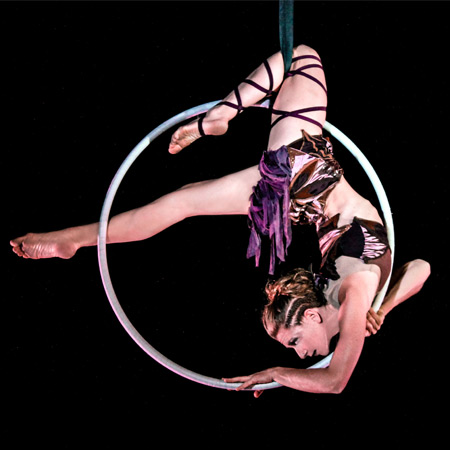 Her unique dance style as an aerialist combines acrobatics with modern dance, filled with aesthetics and creativity. With her dedication to dance, fly and spin in the air, she also makes the audience feel like flying.

Her skills reach a variety of aerial apparatuses such as Silk, Lyra/Hoop, Harness flying, Chord Lisse and Aerial Net. Taking off to fly over the audience including her Counterweight-system in any of her routines shifts a static act to a dynamic and breath-taking aerial performance.

At the age of 7 years she began with dance classes. Her dance education includes Ballet, Modern and Contemporary Dance as well as Dance Theatre. Irene works as a choreographic coach. She is a qualified Pilates and Aerial instructor and currently offers aerial-dance classes in Vienna, teaching the secrets behind the highly acrobatic circus art.

Not only in the air but also on the floor can she amaze with her graceful dance movement. She has also worked with fire-dancers, which include spectacular pyro-effect-performances and a very unique aerial-fire-show.