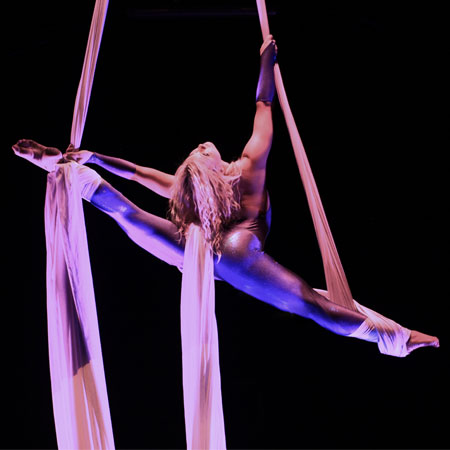 In this stunning aerial tissue act elegant and charm combine with energy and flexibility to create a breathtaking performances that will leave audiences speechless at every twist and turn.

Usually performed as a five-minute aerial dance, she can tailor the performance to suit each client’s needs and also incorporate specific music, costumes and colour schemes. If you’re looking for something a little more upbeat she can also offer an aerial tissue act with a faster pace and added attitude.

Dynamic and undeniable beautiful, inquire to book our amazing aerial silk artist for your event today!

Top Tip
Our talented circus entertainer and performer is also trained in a wide range of additional circus arts and can perform adagio, trapeze and contortion as well. Talk to one of our entertainment coordinators to find out more.