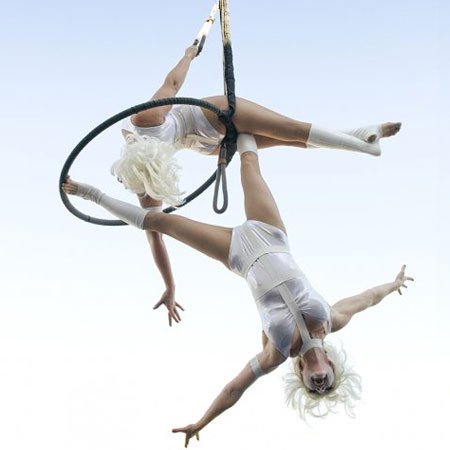 This aerial duo are known for their unique and creative aerial apparatuses and style. Having performed with such high profiled clients as Moscow State Circus, Van Halen, Caesars Palace, Harrahs, Cirque de Soleil, Universal, Planet Hollywood and their on going performances with the Rock n Roll extravaganza Powder!

This World Class cirque entertainment was awarded the 2009 GigMasters Rising Star Award Winner for Top Acrobat for all of the US and Canada.  The girls have the following speciality acts:

Stilts
The duo dance and perform on stilts with a delicious balance of ease and grace.

With a history of extensive dance training, the girls incorporate the fluidity and precision into their art of Stilt performance.

The duo offer a diverse Costume selection that can suit any theme or style.

Aerial
The aerial duo have been providing extraordinary cirque entertainment to some of the largest corporations in the world.

Such clients as AT&T, INFINITI, UNIVERSAL STUDIOS and CIRQUE DU SOLEIL have hired them to perform their one-of-a-kind aerial acts that have been seen by millions.

Having been featured on a national AT&T "Spread the word" TV commercial, the star attraction at Hollywood's Universal City Walk with their Aerial Fire Cirque Show and invited to perform their duo single hoop and double tissue act to promote Cirque Du Soleil's production of KOOZA, the sisters continue to be one of America's most exciting and unique Aerial Acts.

Fire
The duo perform many different styles of fire acts from Fire Fingers, Poi, Torches, Hoop to eating and breathing.

Having studied with Phillip Solomon, a very talented and highly acclaimed artist in this art form, it’s no wonder they performed fire on movies alongside such actor’s as Tim Roth and Steve Buscemi.

A stunningly visual and exciting way to light up any event, commercial, movie scene and music video.

Poles
Known for their in-sync doubles and triples Pole Acts, the sisters continue to break new ground in this style of dancing with cutting edge choreography. Prior to the pole dance explosion in 2006 the girls have been spinning around poles since 2001 and are now known for their power, beauty and grace.

They have performed at the L.A. Leather Fest, The Hollywood Fetish Ball, Exotic-Erotic Ball in San Francisco, The Chicago Market Days Festival, Download Festival in the U.K. and events for Stoli, L.A. Bike & Car show and private parties featuring such icons as the legendary Donna Summer.

" The girls are simply beautiful "