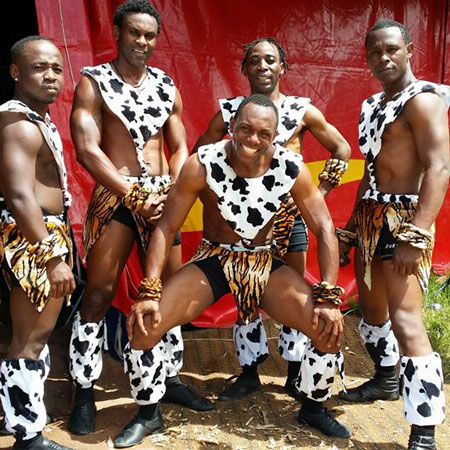 REASONS TO BOOK
A group of fantastic African acrobats who offer stage and street entertainment
Shows include acrobatics stunts, fire acts, dancing and uplifting background music
Have performed at Glastonbury, Womad, The Royal Albert Hall and the Queen’s Jubilee
Originally from Tanzania in East Africa and have travelled all over the world
Based in Kent and available for events all over the UK
Cultural Shows, Themed Entertainment, Stunt Shows, World and Cultural Acts, African, Acrobatics and Hand Balance, Circus Entertainment, Cabaret and Stage Shows

Formed back in 1997 and originally from Tanzania in East Africa, our fantastic African acrobats will amaze your guests with a variety of acrobatics tricks and skills they learned on the streets of their home town Dar-Es-Salaam.

Our African Acrobats UK are available to deliver some high impact street entertainment for a wide variety of events, either on or off the stage. Their acrobatic show can take place almost anywhere and is extremely versatile. They offer and eye-popping range of acrobatic stunts, fire acts, traditional dancing, limbo, chair stacking and even halloween or Christmas spectacles. They have a rage of themed costumes available and options to customise routines and appearance

African Acrobats UK have several performers at your disposition. You can have multiple members for the high impact acrobatic show or just two or three for smaller intimate events. Either way their brilliant street entertainment always has audiences amazed and in awe of their skills.

Before coming to the UK, the African Acrobats toured extensively in South Africa around Botswana, Zimbabwe and Mozambique. Since then they have appeared all over the UK and Europe at festivals such as Glastonbury, Womad, Sidmouth International Festival. They have also approved at The Royal Albert Hall, Canary Wharf, Sunderland Football Stadium The Queen's Jubilee, Commonwealth Olympics in Manchester, Blue Peter and more.

Get in touch with our Entertainment Coordinators to book these themed acrobats for your event.

" These unbelievable artists had most of the audience totally spellbound and speechless and undoubtedly contributed to the major success the event certainly was... please offer our thanks to all of these superb stars. "

" Dazzling performances. They certainly are a most professional and hard working team. "

" They went down brilliantly, the biggest problem being the young children from the audience trying to re-enact the acrobatics themselves afterwards (they were so impressed!). The troupes were real professionals. "