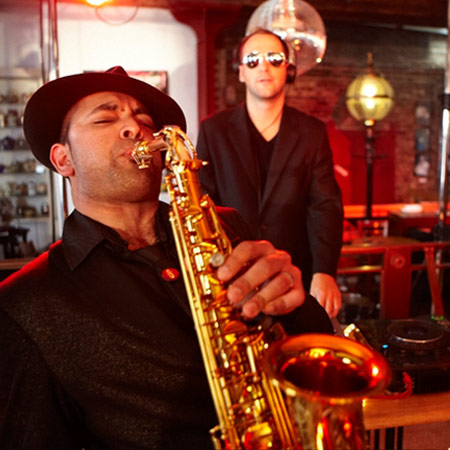 REASONS TO BOOK
Top class set especially created for a party hosted by Penelope Cruz
An upbeat fusion of live percussion, strings, sax and a DJ
Features top London DJs such as Jose Carretas (Gorrilaz) and DJ Goldirocks
Entertains guests with an upbeat fusion of soulful house and Latin grooves
Based in London and available to perform at events worldwide
Live Music and DJ, Chill Out Music, DJ with Musicians

This DJ Set is a top class international act. The set was specially created for a party hosted by Penelope Cruz in Cannes during the 2009 Film Festival.

The DJ Set has subsequently been performed to great acclaim at many events including the Basel Art Fair, a private Birthday Party in a Swiss chateau, hosted by Lord Norman Foster and at the launch of the Landrover Evoque at the London Boat Show.

The Set is a unique fusion of live percussion, strings, sax, and a DJ. The set can also feature a male or female vocalist. The performance entertains your guests with an upbeat sound of soulful house and Latin grooves, suitable as either contemporary and cool background music, or as dance music.

Their DJs can also play in between sets and/or until the end of the night, with the option of this featuring short improvisational sets with a percussionist, saxophonist or violinist if requested. The DJ Set also offers bespoke options to suit your event.

" The party we held in Vincy in the honour of Lord Weidenfeld's birthday was a great success and all our guests were amazed by the wonderful music and atmosphere. We really enjoyed hearing you and would surely recommend you. "