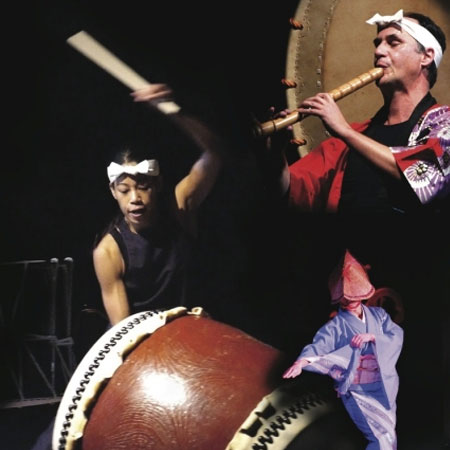 Experience the thunderous rhythms of the ancestral Japanese Taiko drums, the magical sounds of bamboo flutes and colourful traditional costumes

In addition to drums of assorted sizes, this Taiko drumming act incorporates the shakuhachi and the fue (both bamboo flutes), as well as colourful dance and choreography.

This act has toured internationally in countries that include Russia, Italy, Brazil, Argentina, Switzerland, Germany, France, Mexico, Republic of Georgia and more.  This professional group of musicians have appeared on television channels around the globe; ESPN, NBC, the History Channel and Russian National TV.

The group’s music is also featured on Nintendo’s wii game ‘Red Steel  1 and 2’.

" In its choreography and its vigor, Taiko becomes almost a martial art, one in which violence has been sublimated into disciplined exultation in a blend of high-decibel virtuosity and sinful shakuhachi solos. Precision and energy are paramount here and the product, for me, was medicinal. "

" These drummers were clearly enduring some metaphysical test, but less grueling in the program, Marco Lienhard’s deeply fanciful solos on the shakuhachi looked fully invested and with more than just energy. It is the layering of drum patterns and sonorities in intricate compositions that represent the key to the experience. "