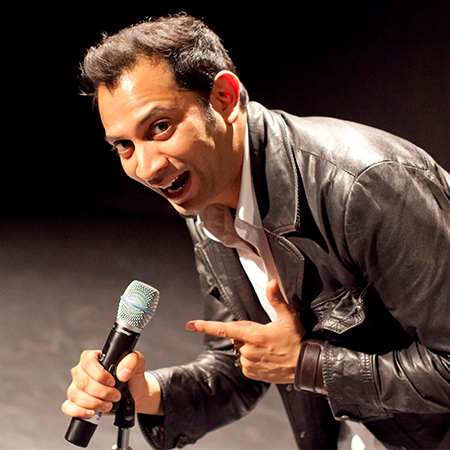 REASONS TO BOOK
Impressionist and award ceremony host Anil Desai is an in-demand British comedians performing on the international circuit
Has entertained audiences worldwide with his solo shows and hosted numerous award ceremonies and corporate gigs
Anil has participated in the UK’s biggest summer festivals including Latitude, Bestival, Splendour Fest, and the Electric Picnic, among others
Desai’s unique brand of feel good, energetic, stand-up comedy is based on his real life stories, experiences and observations
Anil Desai is based in London and available for international bookings
After Dinner and Comedy Hosts, Presenters,Comperes and Event Hosts, Speakers and Hosts

Anil has performed around the world becoming one of the best impressionist comedians to emerge from the UK performing on the international circuit.

He has been invited onto many of the world’s best comedy and entertainment stages such as The Comedy Store, Late & Live, Late Laughs, The Udderbelly, The Spiegel Tent, The Wellington Opera House, Her Majesty’s Theatre London at the Edinburgh, Melbourne, Sydney, New Zealand, and Ireland’s International Comedy Festivals.

Having entertained audiences worldwide performing his hit solo shows ‘Stand Up Chameleon’, ‘Hey, Impressions Guy!’, the ‘Night at the Movies' trilogy and his current show ‘Impressions of a Hindude’, Anil has become one of the most popular British comedians internationally.

Along the way, he has been on numerous international comedy tours, working with many veteran and ‘up ’n coming’ comedians in over 20 countries worldwide including Slovenia, South Africa, India, Singapore, Malaysia, Indonesia, Australia, New Zealand, the South Pacific, the Netherlands, Ibiza, Montenegro, Dubai, Lebanon, Germany and Ireland.

Anil has also appeared at some of the UK’s biggest summer festivals including Latitude, Bestival, Splendour Fest, Chilli Fest and the Electric Picnic, among others.

Desai’s unique brand of feel good, energetic, stand-up comedy is based on his real life stories, experiences and observations. At times dry, occasionally sarcastic, but with genuine honesty and an optimistic wisdom, from his love of movies, and film-stars to his everyday life, global travels, relationships and the ever changing state of the world and it’s cultures.

His sets are fused with a who’s who of amazing impressions, international accents and everyday characters as he twists, turns and transforms himself into our favourite movie stars and celebrities with dynamic speed and lovable charm, often losing himself in the mix whilst creating hilariously entertaining results and being one of the most adaptable comics in the industry.

If you’re interested in booking a stand-up comedian or awards host in London, don’t hesitate to enquire about Anil Desai. Our team of Entertainment Experts will be happy to answer all the questions you may have about him and assist you with your booking.