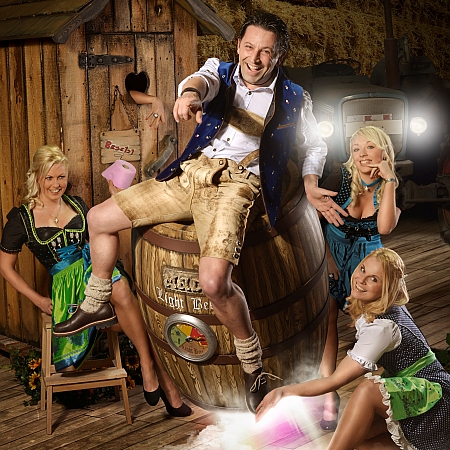 Since early childhood, magic has always fascinated this Austrian artist. However, it was only a few years ago that he made the decision to dedicate himself exclusively to this craft. Despite his relatively short career, he has already enchanted thousands of enthusiastic spectators throughout Europe and the world on stages large and small. Though he performs over 100 magic tricks in his shows, his real passion is the illusion.

As the first Austrian magician to win the Merlin Award in 2014, the oscars for magicians, he prides himself on being in the same league as previous winners such as David Copperfield, Siegfried & Roy and Chris Angel. One of his most famous illusions is what he calls his "Special Show." The highlight of this act is for him to disappear from an exploding box high up in the air, and to reappear shortly thereafter in a helicopter!

This signature act, together with his many other original illusions, have allowed him to shine in the field of magic, earning the respect even of his peers. In 2013, he won the top prize in the International Grand Prix of Magic. He was also adjudged the Top Entertainer in the 2013 Magic Festival in China, as well as the first place in the "Illusions" category at the International Magic Festival, Tschechien. He even made the semi-finals on Britians Got Talent making him a highly sought after magician across the globe.

So what makes this extraordinary magician tick? He discards the old style of magic and takes a completely new outlook - something that allows him to think out of the usual box and see illusions from fresh new angles. The results are extraordinary! A selection of his satisfied clients include BMW, Mercedes Benz, Canon and Gasometer Wien.